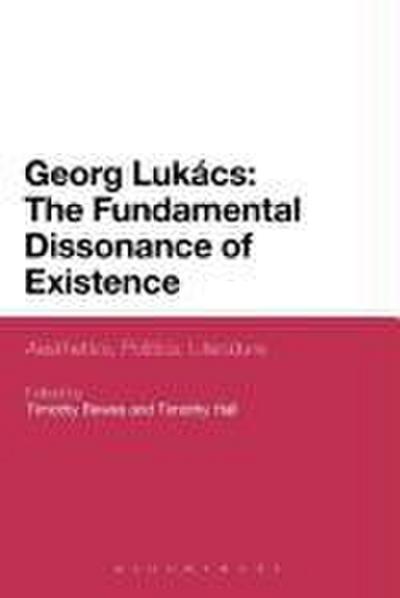 Timothy Hall is Senior Lecturer in the Department of International Politics at the University of East London, UK. He is co-author of The Modern State: theories and ideologies (Edinburgh University Press, 2007).
The end of the Soviet period, the vast expansion in the power and influence of capital, and recent developments in social and aesthetic theory, have made the work of Hungarian Marxist philosopher and social critic Georg Luk cs more vital than ever. The very innovations in literary method that, during the 80s and 90s, marginalized him in the West have now made possible new readings of Luk cs, less in thrall to the positions taken by Luk cs himself on political and aesthetic matters. What these developments amount to, this book argues, is an opportunity to liberate Luk cs's thought from its formal and historical limitations, a possibility that was always inherent in Luk cs's own thinking about the paradoxes of form. This collection brings together recent work on Luk cs from the fields of Philosophy, Social and Political Thought, Literary and Cultural Studies. Against the odds, Luk cs's thought has survived: as a critique of late capitalism, as a guide to the contradictions of modernity, and as a model for a temperament that refuses all accommodation with the way things are.
Re-examines the principal themes of Luk cs's work, considering their relevance for a new generation of scholars interested in the relations between politics and aesthetics.
Acknowledgements Abbreviations Introduction: Fundamental Dissonance Timothy Bewes and Timothy Hall Part I: Paradoxes of Form 1. Temporalized Invariance: Luk cs and the Work of Form, Yoon Sun Lee 2. How to Escape from Literature? Luk cs, Cinema, and The Theory of the Novel, Timothy Bewes 3. Capitalist and Bourgeois Epics: Luk cs, Abstraction and the Novel, David Cunningham 4. Typing Class: Classification and Redemption in Luk cs's Political and Literary Theory, Patrick Eiden-Offe Part II: Life, History, Social Theory 5. Luk cs sans Proletariat, or Can History and Class Consciousness be Re-historicized? Neil Larsen 6. Rethinking Reification, Andrew Feenberg 7. Justice and the Good Life in Luk cs's History and Class Consciousness, Timothy Hall 8. Capitalist Life in Luk cs, Stewart Martin Part III: Aesthetic Reframings 9. Art for Art's Sake and Proletarian Writing, Georg Luk cs 10. The Historical and Political Context of Luk cs's 'Art for Art's Sake and Proletarian Writing', Andrew Hemingway 11. 'Fascinating Delusive Light': Georg Luk cs and Franz Kafka, Michael L wy 12. The Historical Novel After Luk cs, John Marx 13. Realism, Totality, and the Militant Citoyen: Or, What Does Luk cs Have to Do With Contemporary Art? Gail Day Appendix 14. An Entire Epoch of Inhumanity (1964 Preface to Probleme des Realismus, III), Georg Luk cs Contributors Index