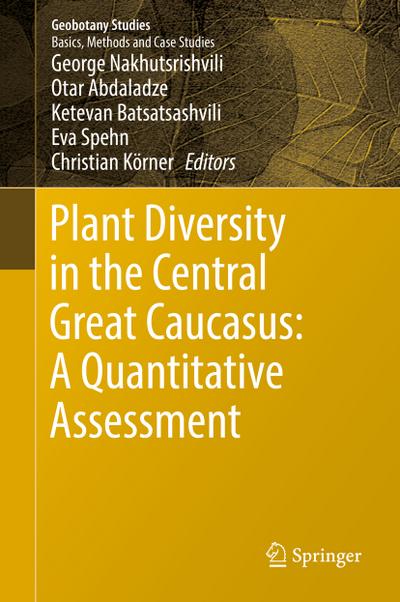 Plant Diversity in the Central Great Caucasus: A Quantitative Assessment

Christian Körner is Professor emeritus from the University of Basel, Switzerland, and got his academic training in Innsbruck, Austria. His involvement in this book arises from his expertise in alpine plant life and alpine treeline research with an emphasis on global comparisons, on which he published two Springer books. Körner is a member of several academies of science and a foreign honorary member of the Ecological Society of America. He founded and chaired the Global Mountain Biodiversity Assessment for 15 years. He published more than 300 scientific articles and is one of the most highly cited authors in plant ecology. His many visits to the Caucasus date back to 1979, in 2014 he was awarded a Dr. h.c. from Ilia University, Tbilisi, Georgia.

George Nakhutsrishvili is an Emeritus Professor at Ilia State University, Tbilisi, Georgia, as well as the Head of Department of Plant Systematics and Geography at Tbilisi Institute of Botany. He is a member of the Georgian and Austrian Academies of Sciences. He also serves as the Focal Point of the Caucasus Plant Red List Authority, IUCN. He has previously worked as the Director of Tbilisi Institute of Botany for 25 years. His research interest is primarily in studies of alpine plant diversity and ecology, phytosociology, and plant Red Listing.

He has published more than 200 papers and completed work on 12 books.

Otar Abdaladze is a Professor of Ecology at Ilia State University, Tbilisi, Georgia. He also serves as the director of Alpine Ecosystems Research Program in the Institute of Ecology of this university. He has previously worked as Deputy Director and Head of the Department of Ecology of Alpine Plant Vegetation of Tbilisi Institute of Botany. His research interest is primarily in plant functional ecology and diversity.


He has published about 70 papers and four books. He serves as a member of the editorial board of the scientific journal Applied Ecology and Environmental Research.


Ketevan Batsatsashhvili is an Associate Professor of Botany at Ilia State University, Tbilisi, Georgia. She also serves as the Programme Officer of the Caucasus Plant Red List Authority, IUCN. She has previously worked as a Researcher at Tbilisi Institute of Botany and Ivane Javakhishvili State University of Tbilisi. Her research interest is primarily in studies of plant and lichen diversity and Red Listing, ethnobotany and ethnolichenology.


She has published about 25 papers and completed work on chapters of two books.


Eva Spehn is coordinating the Global Mountain Biodiversity Assessment (GMBA), a core project of Future Earth in Switzerland, since its start in 2000. She received her PhD in plant ecology at the University of Basel with Prof. Körner. Several joint GMBA research projects with the co-editors got her involved in this book, on mountain biodiversity in the Caucasus, on georeferenced biodiversity databases, and on effects of land use change on alpine biodiversity and ecosystem functions in the Caucasus. She has published 30 scientific articles and edited 3 books and several special journal issues on Mountain Biodiversity.

This book presents the first assessment of the high-elevation flora of the Central Caucasus with a community ecology emphasis. Following a geostatistical-climatological description of the region (in comparison to the European Alps), it describes the montane, alpine and nival plant assemblages on the basis of an ecological approach that combines moisture, soils and local habitat peculiarities.
Highlights include the famous giant herb communities in treeless parts of the upper montane belt, the various facets of alpine turf, and the unique assemblages and settings in the nival region. Further chapters address potential niche conservation between the Caucasus and the Alps, as well as a compilation of plant species habitat preferences (indicator values) that applies to a concept developed for the Alps.
Richly illustrated and featuring extensive quantitative data on species abundance, the book offers a unique guide to the plant species diversity of this prominent mountain range, and a valuable resource for comparative ecology and biodiversity assessments of warm temperate mountain systems.
Presents the first synthesis of the flora of the uplands in the Central Caucasus
A Geostatistical and Bioclimatological Comparison of the Central Great Caucasus and the Central Alps.- Vegetation of the Central Great Caucasus Along W-E and N-S Transects.- Plant Diversity of the Central Great Caucasus.- Quantitative Analysis of the Phytosociological Relevés From the Central Greater Caucasus.- A Comparison of Climatic Niches of the Same Alpine Plant Species in the Central Caucasus and the Alps.- New Indicator Values for Central Caucasus Flora.