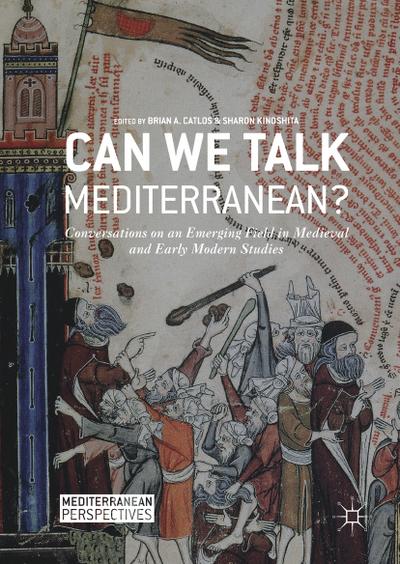 Can We Talk Mediterranean?

Brian A. Catlos is Professor of Religious Studies at the University of Colorado at Boulder and Research Associate in Humanities at the University of California, Santa Cruz, USA. He is the award-winning author of The Victors and the Vanquished: Christians and Muslims of Catalonia and Aragon, 1050-1300; Muslims of Medieval Latin Christendom; and Infidel Kings and Holy Warriors.

This book provides a systematic framework for the emerging field of Mediterranean studies, collecting essays from scholars of history, literature, religion, and art history that seek a more fluid understanding of "Mediterranean." It emphasizes the interdependence of Mediterranean regions and the rich interaction (both peaceful and bellicose, at sea and on land) between them. It avoids applying the national, cultural and ethnic categories that developed with the post-Enlightenment domination of northwestern Europe over the academy, working instead towards a dynamic and thoroughly interdisciplinary picture of the Mediterranean. Including an extensive bibliography and a conversation between leading scholars in the field, Can We Talk Mediterranean? lays the groundwork for a new critical and conceptual approach to the region.
Provides a thoroughly interdisciplinary approach to the emerging field of Mediterranean Studies
1. Why the Mediterranean?.- 2. The Thalassal Optic.- 3. Negotiating the Corrupting Sea: Literature "in" and "of" the Medieval Mediterranean.- 4. Desiderata for the Study of Early Modern Art of the Mediterranean.- 5. The Maritime, the Ecological, the Cultural-and the Fig Leaf: Prospects for Medieval Mediterranean Studies.- 6. Beneath the Surface: Responses and Queries.- 7. Reflections: Talking Mediterranean.- 8. Further Reading.