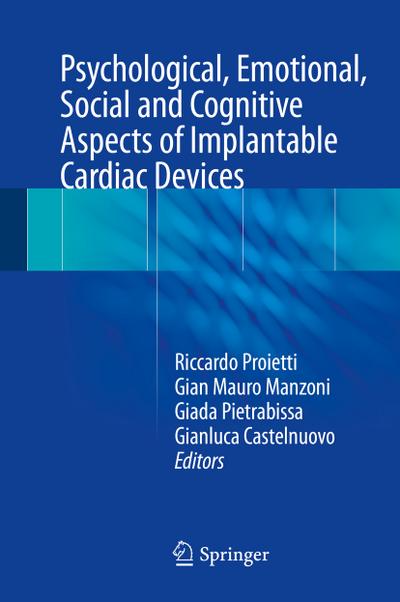 Since 2010 Dr. Riccardo Proietti MD has operated as Consultant Cardiologist at Luigi Sacco Hospital of Milan, specialising in cardiac pacing and electrophysiology. He has been certified in transthoracic echocardiography by the Società Italiana di Ecografia Cardiovascolare (SIEC). He is a member of the European Heart Rhythm Association (EHRA), the National Cardiology Association (ANMCO) and the Italian Society of Echocardiography (SIEC).

Between 2005 and 2012 Dr. Gian Mauro Manzoni was a clinical psychologist and researcher at the Ospedale San Giuseppe, Istituto Auxologico Italiano, specialising in cardiac rehabilitation. From January 2013 to March 2014 he held a position as a post-doc researcher at the Catholic University of Milan, Department of Psychology. Since May 2014 he has been the author of several articles in national and international peer-reviewed journals, as well as acting as the associate editor of the peer-review journal Frontiers in Psychology for Clinical Settings.

Prof. Gianluca Castelnuovo has served as the Assistant Professor of Clinical Psychology and Rehabilitation Psychology at the Catholic University of Milan since 2008. He is the author of several articles in national and international peer-reviewed journals, as well as acting as the specialty Chief Editor of Frontiers in Psychology for Clinical Settings and the Associate Editor in clinical and health psychology journals (BMC Obesity, Eating and Weight Disorders, Health Psychology and Behavioural Medicine).

Prof. Giada Pietrabissa trained at the Catholic University of Milan, Italy. She has written a number of articles in national and international peer-reviewed journals, and is a member of Order of Psychologists of Lombardy. She also operates as a psychological support consultant.

Electrical therapy of the heart has rapidly evolved over recent years with the development of the cardiac implantable defibrillator and the application of the cardiac resynchronization therapy to improve performance of the congestive failed heart. There is an impressive amount of literature produced to assess the efficacy and effectiveness of the electrical therapy. New technology is continuously introduced into the market for the treatment of electrical heart disease with optimized performance and implemented design, with approximately 600,000 new pacemakers implanted each year. Attention of the electrophysiology community has mainly focused on the biomedical aspects of electrical therapy, but the psychological, emotional, social and cognitive aspects of the implantable devices has been largely overlooked. Health-related quality of life (QoL) and, to a lesser extent, psychological disorders, i.e. anxiety and depression, have rarely been assessed as outcomes in clinical trials, and results are pointing towards the impact of the implantable devices on QoL and mental health not being direct but moderated and mediated by several biomedical as well as psychosocial variables. Furthermore, the cognitive effects of the implantable devices have rarely been assessed in empirical studies, although cognitive impairment is largely associated with the heart disorders that require implantation of an electrical device and cognitive benefits are strongly expected from the therapy. The aim of this book is to collect, appraise and condense the results of all empirical studies that have investigated, even marginally, the relationships between the implantable devices and any psychological, emotional, social and cognitive dimension. This book is a cornerstone for all involved in device utilization (physicians, nurses, technicians, industry representatives) that need to understand this topic.
Explores the cognitive and emotional impact of implantable cardiac devices
Cognitive function in patients with congestive heart failure.- Heart brain connection in patients with ischemic heart disease.- Neurovegetative system and congestive heart failure.- Cognitive performance in the elderly.- Evolution and principle of pacing devices.- Hemodynamic performance of cardiac devices.- Impact of cardiac devices on QoL.- Pacemakers and cognitive performance.- Anxiety, depression and QoL in patients with ICD.- Emotional impact of device recall.- Cognitive impact of CRT.