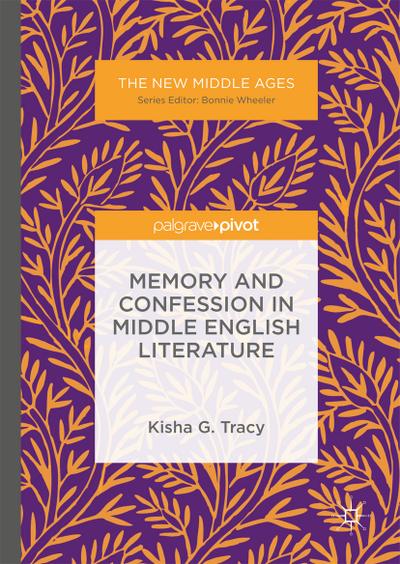 Kisha G. Tracy is Assistant Professor of English Studies, specializing in early British and world literatures, and Co-Coordinator of the Center for Teaching and Learning at Fitchburg State University. Her main research interests include medieval memory and confession, medieval disability, and higher education pedagogy.

This book argues that the traditional relationship between the act of confessing and the act of remembering is manifested through the widespread juxtaposition of confession and memory in Middle English literary texts and, furthermore, that this concept permeates other manifestations of memory as written by authors in a variety of genres. This study, through the framework of confession, identifies moments of recollection within the texts of four major Middle English authors - Langland, Chaucer, Gower, and the Gawain-Poet - and demonstrates that these authors deliberately employed the devices of recollection and forgetfulness in order to indicate changes or the lack thereof, both in conduct and in mindset, in their narrative subjects.

Memory and Confession in Middle English Literature explores memory's connection to confession along with the recurring textual awareness of confession's ability to transform the soul; demonstrating that memory and recollection is used in medieval literature to emphasize emotional and behavioral change.

Extends previous discussions surrounding memory in medieval studies through its discussion of confession
1 Introduction.- 2 Reducere ad memoriam: A Brief Overview of Confession and Memory.- 3 Langland: Piers Plowman, Recollection, Confession, and the Penitent.- 4 Gower: Confessio Amantis and the Fear of Forgetting.- 5 Chaucer: Romances and the Temporality of Confession.- 6 Gawain-Poet: Sir Gawain and the Green Knight, To Forget or Not to Forget.- 7 Final Thoughts.