Topologies as Techniques for a Post-Critical Rhetoric 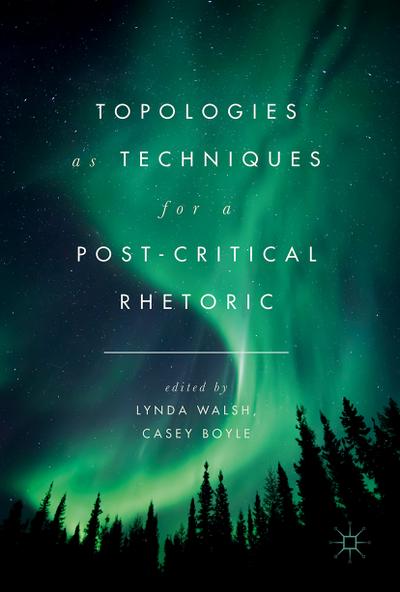 Lynda Walsh is Associate Professor of English at the University of Nevada, Reno, USA. Her most recent book, Scientists as Prophets: A Rhetorical Genealogy (Oxford, 2013) investigates the ethos or public role of science advisers. She has also published on scientific rhetoric and reception theory in journals such as Written Communication, Science Communication, and Rhetoric Society Quarterly.
Casey Boyle is Assistant Professor in the Department of Rhetoric and Writing at the University of Texas in Austin, USA. His work has appeared in Kairos, Philosophy and Rhetoric, Computers and Composition, Technical Communication Quarterly, and College English.

This book restores the concept of topology to its rhetorical roots to assist scholars who wish not just to criticize power dynamics, but also to invent alternatives. Topology is a spatial rather than a causal method. It works inductively to model discourse without reducing it to the actions of a few or resolving its inherent contradictions. By putting topology back in tension with opportunity, as originally designed, the contributors to this volume open up new possibilities for post-critical practice in "wicked discourses" of medicine, technology, literacy, and the environment. Readers of the volume will discover exactly how the discipline of rhetoric underscores and interacts with current notions of topology in philosophy, design, psychoanalysis, and science studies.

Takes forward existing scholarship on "post-critical" approaches to rhetoric as well as rhetoric of science scholarship
1. From Intervention to Invention: Introducing Topological Techniques
2. Aristotle's Topoi and Idia as a Map of Discourse
3. Topoi and Tekm ria: Rhetorical Fluidity among Aristotle, Isocrates, and Alcidamas
4. The Shape of Labor to Come
5. Inventing Mosquitoes: Tracing The Topology Of Vectors For Human Disease
6. Genre Signals in Textual Topologies William Hart-Davidson and Ryan Omizo
7. Mapping Rhetorical Topologies in Cognitive Neuroscience
8. Topology and Psychoanalysis: Rhetorically Restructuring the Subject
9. A Year Of Deliberating Danger(ously): A Network Topology Of The Loaded Climate Dice
10. Getting Down in the Weeds to Get a God's-Eye View: The Synoptic Topology of Early American Ecology
11. Enthymematic Elasticity in the Biomedical Backstage.