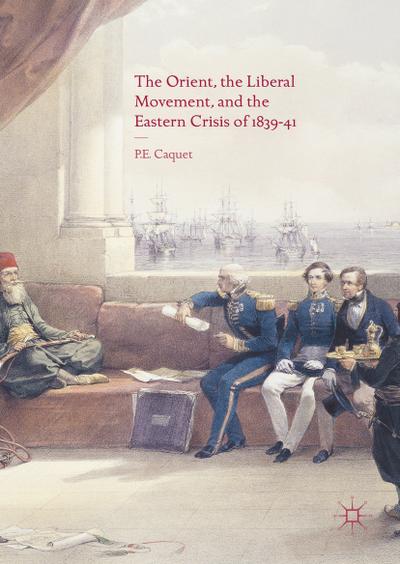 The Orient, the Liberal Movement, and the Eastern Crisis of 1839-41

This book focuses on the Eastern Crisis of 1839-41, closely examining the first instance of coordinated Western intervention in the Middle East during the modern era. Readers can explore topics such as how culture, domestic politics, and ideology shaped diplomacy in this landmark crisis, and the importance role played by religion - including, alongside mainstream Christianity, the Protestant Zionist movement. Highly informative and fully researched, this book suggests that the Eastern Crisis - and its associated diplomatic and military efforts - marked the first of many modern-era attempts to “improve” the region by moulding it in a Western image, providing scholars with a new perspective on this period of history.

1. Three Ships
This introductory chapter provides key background on the Eastern Crisis, such as on the diplomatic and military narrative. It introduces the main protagonists, including the French premier Adolphe Thiers, Lord Palmerston, Metternich, and his Prussian counterpart Werther. The introduction also differentiates the book from existing works on the crisis and on nineteenth-century European diplomacy. Finally, it touches on the European Oriental renaissance, on ambassadorial roles and the contents of the consular correspondence, and the role and nature of the contemporary press and public opinions.

This makes the point that policy, far from being the immutable product of geographic imperative, was shaped by domestic pressures and opinions. Palmerston was compelled to tender his resignation in 1840 when the cabinet refused to sign his treaty. Louis-Philippe and Thiers both owed their careers to the press and were the creatures of the great Paris dailies. In Russia, factions of Orthodox nationalists and Westernisers competed for the Tsar’s attention, causing priorities to shift between expansion and retrenchment. Nor was diplomacy in the Eastern Crisis a closed-door, aristocratic exercise, on the contrary: the protagonists made frequent use of public diplomacy, appealing to publics across national borders.

This chapter explains how Mehemet Ali became a French protégé and conversely a bugbear of the northern courts. Drawing from the memory of the Napoleonic expedition in Egypt, helped by Champollion and nascent Egyptology and by his own modernising propaganda, the Pasha became identified as a standard bearer for the French civilising mission and, by extension, a Liberal champion against the ancien régime that was characterised by the Ottoman Empire. He also appealed to many European and British radicals, and in Britain, this created a challenge for the Whig cabinet, which relied on radical parliamentary support. In the northern courts, this made him anathema: a rebel and an aggressor, as Bonaparte had been.


4. The Age of Turkish Improvement

Palmerston’s modernising candidate was Turkey itself. Thanks to early efforts by Sultan Mahmud, the Ottoman Empire could pretend, by the 1830s, to Whig reforming patronage. Decisive steps were taken in the form of the Balta-Liman trade convention and the Edict of Gulhané. The Syrian rebellion of 1840 against Mehemet Ali, and the echo it found in the British media, helped broaden the appeal of the Ottoman cause. Official belief in Turkey’s improvement program was moreover reflected in British policy in Syria after the invasion, in 1841. Long before, nevertheless, Britain’s espousal of Ottoman reconstruction, through a program of free trade, laissez-faire, and security of person and property, made its alignment in the Eastern Question all but predestined.

On 5 February 1840, Father Thomas, a Sardinian who was superior at a Franciscan convent in Damascus, disappeared along with his servant, Ibrahim Amara. The Jews were accused, and the ensuing affair drew in the European consular services and press-reading publics. That the Damascus Affair took place at the same time as the Eastern Crisis was a coincidence, but that it had such an echo was not. In Britain, especially, the wish was widely shared for the crown to protect the dispersed Jews from persecution. This combined with widespread belief, based on scripture and prophecy, in the Restoration or return of the Jews to Palestine. Such societies as the London Society for the Promotion of Christianity among the Jews were prepared to lobby for it, as was a Berlin-based sister organisation. The stage was set both for religion to impart an increased acuteness to the crisis, and for the Holy Land to become again, after so many centuries of neglect, an area of contention for the European powers.

The confluence of millennial expectations, the Damascus Affair, and the Eastern Crisis did not just make the Restoration seem actual and even urgent. Gestures by Palmerston fed momentum behind the idea and helped spawn fresh plans such as those of the London Society. The Jewish cause, at first little more than a nod to a powerful lobby, turned into the second pillar to a more general British design for the Middle East. The Catholic and Orthodox chancelleries meanwhile came up with their own plans for the newly evacuated Jerusalem. While this failed due to confessional rivalry and Austrian and Russian restraint, great-power prerogatives with regard to the Holy Sites were reaffirmed in 1841. The consequences, soon to be seen in the shape of the Crimean war of 1853-6, were of long-term significance.

The news of the July 1840 treaty met in Paris with public fury. The press bayed for war, and king and prime minister called up multiple army classes. Then a young German jurist and writer named Nikolaus Becker published a poem entitled the Rheinlied. The storm that followed saw the composition of both the famously militaristic Wacht am Rhein, by Max Schneckenburger, and the future German national anthem, the Deutschlandlied. The Rhine Crisis, a clash of poets and a clash cultures, also took place on that battleground between Liberalism and reaction that was Germany. The French, aggrieved at the abandonment of their Egyptian champion, thought a revolutionary war might yet save the situation. Among Germans, this provoked an atavistic counter-cry, but it also involved an agonising choice between French-inspired Liberalism and Austro-Prussian authoritarianism. In turn, this fed into the diplomacy of the Eastern Crisis itself through key backdoor compromise initiatives by Metternich and Wether, who were terrified of disorders of whatever nature.

The Eastern Crisis of 1839-41, Diplomatic Mirages argues, was but a clash of ideologies and national missions. The need to bring European reform to the Orient, the manner in which it must be done, or the absence of it, determined, for the powers, what line to adopt and who to back. Religious missions, and a renewed interest in the Holy Land, also helped mobilise publics in favour of intervention. Whether in Egypt itself or in Turkey, or elsewhere in the Middle East, both religiously-grounded involvement and the notion that it was a European vocation to help establish better political governance were ideas destined to endure.