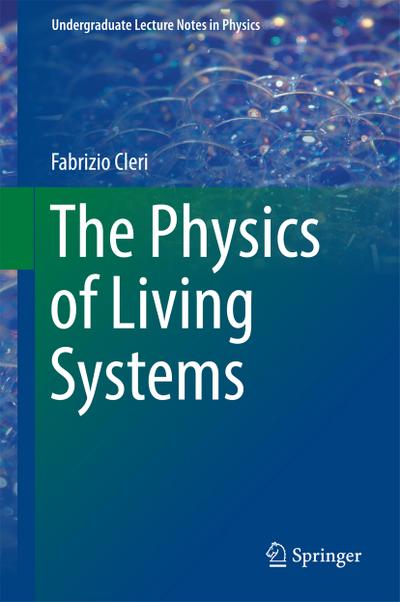 The Physics of Living Systems

Fabrizio Cleri received his doctor's degree in Physics from the University of Perugia, Italy in 1984 and his Habilitation in Physics (HDR) from the University Louis Pasteur in Strasbourg in 2004. After 20 years spent at ENEA in Rome, he became full professor at the University of Lille I and Director of Research at IEMN-Cnrs in Lille in 2006. Fabrizio Cleri is the founder and director of biennial Master studies in Biological and Medical Physics in the Department of Physics in Lille. His teaching covers both introductory-level and advanced courses in Condensed Matter Physics and Biophysics, as well as Applied Nuclear Physics for medical physicists. Author of more than 120 scientific papers and more than 50 invited talks, with over 3000 citations, his skills as a theoretical physicist range from nuclear and radiation physics, to condensed-matter physics and materials mechanics, to molecular physics, biophysics and bio-nanotechnology. He gave major contributions to the understanding of micromechanical phenomena and charge/heat transport processes in nanomaterials and biological molecules. Since 1986, he has been an invited professor at the CEA of Cadarache, at MIT in Boston, at the KITP of UC Santa Barbara, California, at Rensselaer Polytechnic Institute, Troy, New York, at the Institute of Industrial Sciences at the University of Tokyo, as well as permanent researcher at Argonne National Laboratory in Chicago between 1995 and 1998. He was an Associate Editor of Applied Physics Letters until 2016 and of the European Physical Journal B until 2014, and since 2014 serves as AE of the European Physical Journal E.
The author is maintaining a website at physicsoflife.net which contains many additional resources for both the students and the instructors: - high-resolution version of all non-copyrighted images in various formats, including OpenOffice slides; - more complete solutions to all the end-of-chapter problems, as well as additional "questions-and-answers" students' self-examination checklists; - a set of C++ computer programs for some of the mathematical models described in the book.

In this book, physics in its many aspects (thermodynamics, mechanics, electricity, fluid dynamics) is the guiding light on a fascinating journey through biological systems, providing ideas, examples and stimulating reflections for undergraduate physics, chemistry and life-science students, as well as for anyone interested in the frontiers between physics and biology.

Rather than introducing a lot of new information, it encourages young students to use their recently acquired knowledge to start seeing the physics behind the biology. As an undergraduate textbook in introductory biophysics, it includes the necessary background and tools, including exercises and appendices, to form a progressive course. In this case, the chapters can be used in the order proposed, possibly split between two semesters.

The book is also an absorbing read for researchers in the life sciences who wish to refresh or go deeper into the physics concepts gleaned in their early years of scientific training. Less physics-oriented readers might want to skip the first chapter, as well as all the "gray boxes" containing the more formal developments, and create their own á-la-carte menu of chapters.