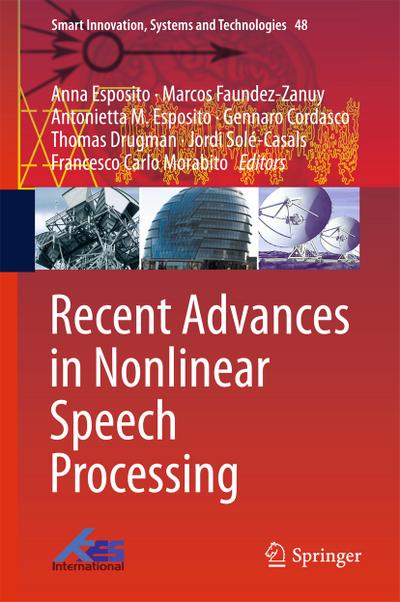 This book presents recent advances in nonlinear speech processing beyond nonlinear techniques. It shows that it exploits heuristic and psychological models of human interaction in order to succeed in the implementations of socially believable VUIs and applications for human health and psychological support. The book takes into account the multifunctional role of speech and what is “outside of the box” (see Björn Schuller’s foreword). To this aim, the book is organized in 6 sections, each collecting a small number of short chapters reporting advances “inside” and “outside” themes related to nonlinear speech research. The themes emphasize theoretical and practical issues for modelling socially believable speech interfaces, ranging from efforts to capture the nature of sound changes in linguistic contexts and the timing nature of speech; labors to identify and detect speech features that help in the diagnosis of psychological and neuronal disease, attempts to improve the effectiveness and performance of Voice User Interfaces, new front-end algorithms for the coding/decoding of effective and computationally efficient acoustic and linguistic speech representations, as well as investigations capturing the social nature of speech in signaling personality traits, emotions and improving human machine interactions.