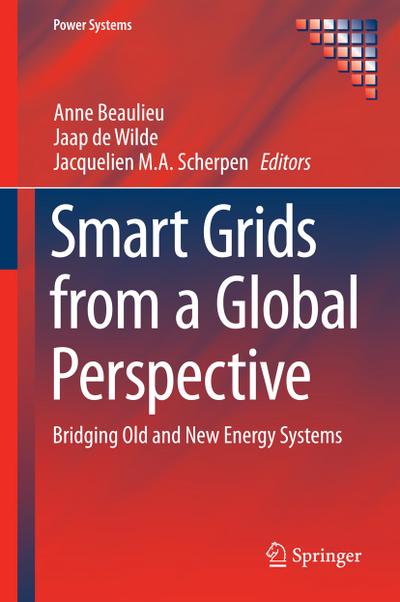 Smart Grids from a Global Perspective

Jacquelien Scherpen's work has made a major mark in the area of model order reduction and physics-based control methods for complex nonlinear system. She combines new insights on both modeling and stabilization of nonlinear networks, including ground-breaking work on model reduction and complexity handling based on power and energy methods for control. More recently, she has developed these methods in the context of smart grid applications, resulting in a compelling demonstration of the value of applied mathematics for solving issues raised by smart grids. Her current work spans complexity reduction methods for control of distributed systems, energy- and power-based control methods for distributed systems, and distributed optimal control methods via pricing mechanisms. This unique combination promises to make important contributions to the theoretical developments in the field of systems and control, as well as to industrial, robotics, power systems, and smart grid applications. Professor Scherpen was recently promoted to a top-level professorship. As Scientific Director of the Institute for Technology and Management, she leads a team of outstanding researchers, several of whom are award-winning talents.Anne Beaulieu is project manager of the Groningen Energy and Sustainability Programme and research coordinator of the Energy Academy Europe. She joined the University of Groningen following several years as senior research fellow at the Royal Netherlands Academy of Arts and Sciences (KNAW), where she also acted as deputy programme leader of the Virtual Knowledge Studio for the Humanities and Social Sciences between 2005 and 2010. Before that, she obtained a PhD from the University of Amsterdam (2000) and in 1999, she was appointed Lecturer in Science, Culture and Communication, in Bath, UK. Her work at GESP is well served by her interdisciplinary background in the humanities and social sciences (McGill University 1992, 1994). Beaulieu has been a member of the Dutch national research school WTMC (science, technology and modern culture) since its inception.Jaap de Wilde Since 2007, Jaap de Wilde is professor in International Relations & Security at the Department of International Relations & International Organization (IRIO), University of Groningen. From 2008-2012 he was head of department. He is governor of Globalisation Studies Groningen, which he co-founded in 2010. Since 2013 he is chairman of the Dutch Foundation for Peace Research, SVW. From 2001 to 2007, De Wilde was professor in European Security Studies at the Department of Political Sciences, Vrije Universiteit Amsterdam, and from 1995-2007 senior research fellow in European Studies and IR Theory at the Centre for European Studies (CES), University of Twente. From 1993-1995 he worked as senior research fellow at the Copenhagen Peace Research Institute (COPRI).

This book presents a cross-disciplinaryapproach to smart grids, offering an invaluable basis for understanding their
complexity and potential, and for discussing their technical, legal, economic, societal, psychological
and security aspects.

Smart grids are a complex phenomenon involving new, active roles for consumers
and prosumers, novel social, political and cultural practices, advanced ICT,
new markets, security of supply issues, the informational turn in energy,
valuation of assets and investments, technological innovation and
(de)regulation. Furthermore, smart grids offer new interfaces, in turn creating
hybrid fields: with the increasing use of electric vehicles and electric
transportation, smart grids represent the crossroads
of energy and mobility. While the aim
is to achieve more sustainable production, transportation and use of energy, the
importance of smart grids actually has less to do with electricity, heat or gas,
and far more with transforming the infrastructure needed to deliver energy, as
well as the roles of its owners, operators and users. The immediate goal is to
contribute positively to a sustainable world society.

The chapters are revised and expanded texts based upon lectures
delivered at the Groningen Energy Summer School 2014. Questions for further
discussion at the end of each chapter highlight the key themes that emerge.

The book offers an indispensable resource for researchers, professionals and
companies in the power supply industry, and for students seeking to broaden and
deepen their understanding of smart grids.

Foreword.- Introduction.- How
Energy Distribution will Change: an ICT Perspective.- Smart Business for Smart
Users: a Social Agenda for Developing Smart Grids.- Behavioral Aspects of Smart
Grids.- What are Smart Grids? Epistemology, Interdisciplinarity and Getting
Things Done.- Cyber-Security Vulnerabilities: an Impediment against Further
Development of Smart Grid.- The Optimal Control Problem in Smart Energy Grids.-
Economic Regulation of the Energy Market.- Frequency Regulation in Power Grids
by Optimal Load and Generation Control.- Charging Electric Vehicles in the Smart
Grid.- Demand Side and Dispatchable Power Plants with Electric Mobility.- Privacy
Issues in the Use of Smart Meters - Law Enforcement Use of Smart Meter Data.- Conducting
a Smarter Grid: Reflecting in the Power and Security behind Smart Grids with
Foucault.- Emerging e-Practices, Information Flows and the Home: a
(Sociological) Research Agenda on Smart Energy Systems.- Smart Grid Pilot
Projects and Implementation in the Field.- Energy Efficiency in a Mobile
World.- End User Research in Power Matching City II.