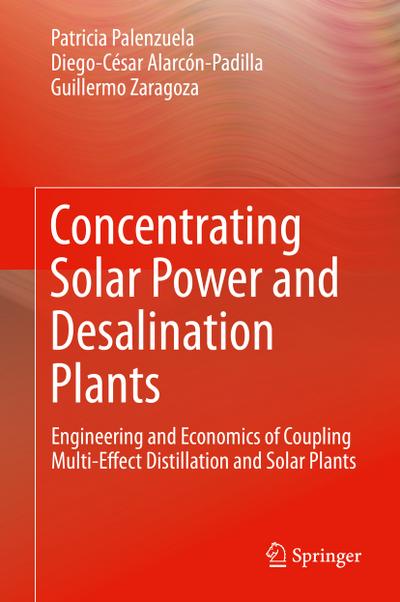 Dr. Patricia Palenzuela is currently a project researcher inthe Solar Desalination Unit at the Plataforma Solar de Almería-CIEMAT, the
largest concentrating solar technology research, development and test center in
Europe. She is a phD from the University of Almería, having developed all the
research activity of her thesis at the Plataforma Solar de Almería. She has
also conducted research at the Qatar Environmental and Energy Research
Institute and the Solar Energy Research Center-Chile (SERC-Chile) as a postdoctoral
fellow

Dr. Guillermo Zaragoza is currently senior researcher at the Solar Desalination Unit of CIEMAT-Plataforma Solar de Almería, and coordinator of the Action Group on "Renewable Energy Desalination" of the European Innovation Partnership on Water of the European Commission.

Dr. Diego-César Alarcón-Padilla is the current head of the Solar Desalination Unit at CIEMAT-Plataforma Solar de Almería. He also holds the position of Operating Agent of SolarPACES Task VI (Solar Energy and Water Processes and Applications) and the coordination of the Sub-Programme IV (Concentrated Solar Power and Desalination, CSP+D) within the framework of the EERA (European Energy Research Alliance) CSP Joint Programme.

This book provides a detailed examination of how two key concerns in many communities across the globe- power and water- can be simultaneously addressed through the coupling of Concentrating Solar Power and Desalination (CSP+D) plants. It undertakes a technological and economic evaluation of the integration of Multi-effect Distillation Plants into CSP plants based on Parabolic Trough solar collectors (PT-CSP+MED), as compared to independent water and power production through Reverse Osmosis unit connection to a CSP plant (CSP+RO). Through this compare and contrast method of analysis, the author establishes guidelines to assist readers in identifying cases wherein PT-CSP+MED systems provide greater benefits from a thermodynamic and economic point of view. The text outlines efficiencies and challenges derived from the combination of PT-CSP power generation with four different desalination plant scenarios, beginning with a description of the equations used in the modeling and validation of a pilot MED plant and followed by detailed thermodynamic analysis of several currently operating CSP+D systems. Comparative thermodynamic assessments are based on a sensitivity analysis from which the overall efficiency of the cogeneration system is determined. The author outlines all the equations used for the modeling of each component and includes 97 comparative tables obtained from the sensitivity analysis, showing the variation of the overall thermal efficiency of the CSP+D as a function of fundamental parameters of the cogeneration cycle, such as the specific electric consumption of the desalination plants, and the turbine outlet temperature of the power cycle. These findings are then placed in practical context through a complete thermo-economic analysis, which is carried out for two specific locations in the Middle East and Europe in order to identify the most practically and economically viable CSP+D system in each region as informed by actual operating conditions, meteorological data and real cost figures for each location.
Features the first available detailed thermo-economic analyses of Concentrating Solar Power and Desalination (CSP+D) Plants, based on actual figures from operating plants
Introduction.- Technology CSP+D- State of the Art.- Available technologies for seawater desalination at large scale.-Cogeneration of Electricity and Desalinated Water.- Concentrating Solar Power plants.- Combination of Concentrating Solar Power and Desalination Plants.- Cooling systems in Concentrating Solar Power Plants.- Steady-State Model of a Solar Multi-effect Distillation Plant.- Multi-effect Distillation Plants-State of the Art.- Description of the plant.- Design of the process.- Instrumentation.- Mathematical Modeling.- Parameterization.- Computational method.- Validation.- Simulations.- Steady-State Modeling of a Parabolic Trough Concentrating Solar Power Plant.- Modeling of a solar field composed of parabolic trough collectors.- Modeling of the power cycle.- Integration of a Desalination Plant into a Concentrating Solar Power Plant.- Description of the CSP+D systems.- Analysis of the integration of a Desalination Plant into a Concentrating Solar Power Plant.- Thermo-economic Analysis.- Sensitivity analysis.- Case Study with Thermodynamic analysis, Economic analysis, Results and Implications.