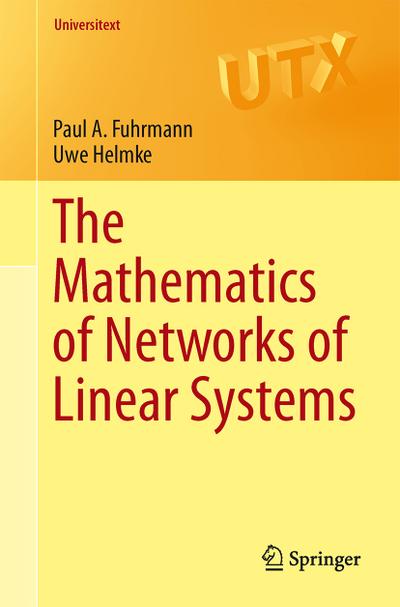 The Mathematics of Networks of Linear Systems

Paul A. Fuhrmann is Professor Emeritus in the Department of Mathematics at Ben-Gurion University of the Negev. His current research interests are in the following directions: Algebraic System Theory, control, observation and model reduction for networks of linear systems.

This book provides the mathematical foundations of networks of linear control systems, developed from an algebraic systems theory perspective. This includes a thorough treatment of questions of controllability, observability, realization theory, as well as feedback control and observer theory. The potential of networks for linear systems in controlling large-scale networks of interconnected dynamical systems could provide insight into a diversity of scientific and technological disciplines. The scope of the book is quite extensive, ranging from introductory material to advanced topics of current research, making it a suitable reference for graduate students and researchers in the field of networks of linear systems. Part I can be used as the basis for a first course in Algebraic System Theory, while Part II serves for a second, advanced, course on linear systems.

Finally, Part III, which is largely independent of the previous parts, is ideally suited for advanced research seminars aimed at preparing graduate students for independent research. "Mathematics of Networks of Linear Systems" contains a large number of exercises and examples throughout the text making it suitable for graduate courses in the area.
Presents a systematic study that develops the functional model approach for multivariable linear systems.
Introduction.-Rings and Modules of Polynomials.- Functional Models and Shift Spaces.- Linear Systems.- Tensor Products, Bezoutians and Stability.-State Feedback and Output Injection.-Observer Theory.- Nonnegative Matrices and Graph Theory.- Interconnected Systems.-Control of Standard Interconnections.- Synchronization and Consensus.- Control of Ensembles.- References.- Index.