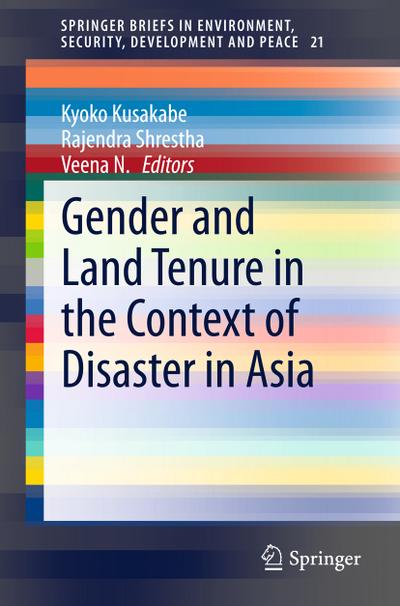 Gender and Land Tenure in the Context of Disaster in Asia

This book explores an interdisciplinary field at the intersection of gender and development studies, disaster and land tenure policy. It is well known that women generally have weaker claims to land. But how does that translate to increased vulnerability during disaster? Using case studies from Asia, this book argues that land tenure is a key factor in mitigating the impact of disasters on women. The scale and frequency of disasters have been increasing in recent decades due to human impact on the landscape and climate. Unsustainable farming and land management systems have increased environmental risks and social vulnerabilities. However, around the world the costs of disasters are disproportionately borne by women, due largely to their reduced mobility and lack of control over assets. In post-disaster settings, women's vulnerabilities increase due to gendered rescue and rehabilitation practices. As such, a gendered approach to land rights is critical to disaster preparedness and recovery.
This is a unique book focusing on gender, disaster and land tenure, especially in Asia
Introduction.- Gender, land tenure and disasters in the Mentawai Islands: Issues and Challenges in Indonesia.- Governance of Urbanization and Disasters: Implications for Property and Gender Relations in India.- Land Slides and Land Rights: Impact of displacement on women's land tenure in Sri Lanka.- State sanctioned land grabs and its impact on communities in Sarawak, Malaysia.- After typhoon Pepeng: Indigenous coping, gender and land tenure in the Cordillera, Philippines.- Post-tsunami revival of the coir industry in Sri Lanka.- Case of flash flood affecting matrilineal society in West Sumatra, Indonesia.