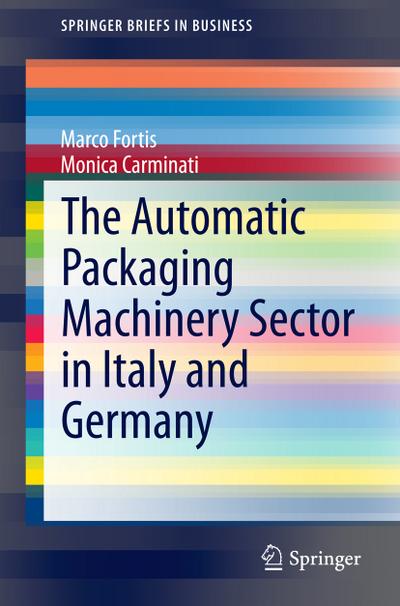 The Automatic Packaging Machinery Sector in Italy and Germany

Marco Fortis, born in 1956, is an economist and vice-president of Edison Foundation. He teaches Industrial Economy and Foreign Trade in the Political Science Faculty of Catholic University of Milan. He is the author or editor of numerous scientific publications, essays, and articles and has contributed leading articles to Economia Politica - Journal of Analytical and Institutional Economics, Il Sole 24 Ore, Il Messaggero, and Panorama.

Monica Carminati, born in 1972, is an economist and senior researcher at the Edison Foundation. She is coauthor with Marco Fortis of many scientific publications, essays, and articles.

This book analyzes the wrapping and packaging machinery sector in the Emilia/Bologna district in Italy and compares the most recent trends with those in the industry in Schwäbisch Hall and Waiblingen, Baden-Württemberg, Germany, which represents a direct rival. In a detailed and original study, the authors trace the evolution of manufacturing in Bologna during a period that witnessed extraordinary growth in automatic wrapping and packaging machines, leading the sector to become a central pillar of Italian mechanical engineering. Similarly, the history of the industry in the Emilia district is described, highlighting the factors that led to its success. A comprehensive comparative analysis of the German and Italian sectors is then performed. Export figures and the trade balance for the sector are examined based on Eurostat data, and the significance of the two districts in terms of global trade is identified with reference to UN data. In addition, the number of companies, sales, and the size of the workforces are thoroughly compared. The book will be of interest to economists and others with an interest in the development and importance of the automatic packaging machinery sector.
Offers a detailed and original comparison of the Italian and German packaging machine sectors
1 Introduction.- 2 Structure and methodology.- 3 Mechanical engineering in Bologna: origins and protagonists. Some historical profiles.- 4 The Emilia automatic packaging machinery district: history and keys to success.- 5 Italy and Germany: the two leading countries in the packaging machinery industry.- 6 The size of the Emilia packaging machinery district.- 7 The size of the German packaging machinery district.- 8 Emilia and Schwäbisch Hall-Waiblingen: the two districts compared.