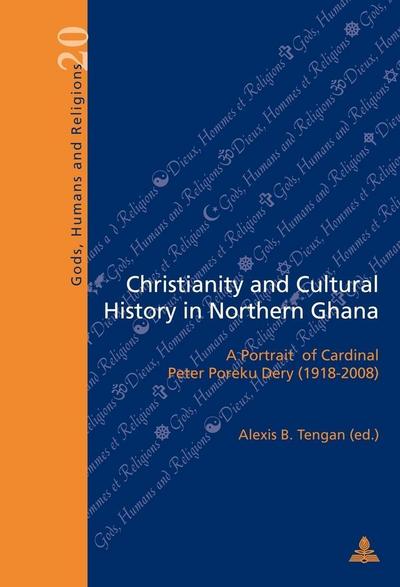 Dr Alexis B. Tengan is a social and cultural anthropologist at KU Leuven, Belgium, and has been a religion teacher for many years, both in Ghana (Ghanasco Tamale (1980-1984) and Damongo (1984-1988)) and currently at St John's International School near Brussels. He has carried out research on farming systems throughout northern Ghana, including the relationship between art, medicine and religion. He also documents the histories of cultural figures and collects sacred objects and artefacts, with the aim of opening a museum.
On Monday 23 April 1906 the Missionaries of Africa, also known as the White Fathers, arrived from Upper Volta, today known as Burkina Faso, in Navrongo to begin their missionary activities in northern Ghana. The small group consisted of three missionaries and a contingent of twenty Africans as helpers. Socially and culturally, the region was still suffering from the consequences of the recently outlawed practice of slave raiding and the terror regimes initiated by Zambarma generals such as Samouri and Babatu.
The inhabitants were still to come to terms with the European use of military force to try to establish colonial rule. Many of the populations and groups residing in what was then called the Northern Territories of Ghana, and also those in semi-urban trading centres such as Tamale, Wa and Bawku, had, over the past century, come to adopt aspects of Islamization within their cultures and had accepted the centralizing chieftaincy structure as their main socio-political system.
Cardinal Dery was born around this time into a priestly class among the Dagara people, and his life story as a religious leader vividly captures the cultural evolution of the whole region within this period.
This book brings together local scholars of different discipline to reflect on cultural history of northern Ghana using religious thought and leadership as a rallying point. The issues dealt with include cultures in contact - religions in conflict; reconciling religions - reconciling people and renewing culture - renewing religions.
Contents: Alexis B. Tengan: Dagara Appropriation of Christianity. Missionary and Colonial Movements into Northwest Ghana since 1929 - Linus Zan: African Traditional Religious Leadership and the Worldview of Peter Cardinal Poreku Dery - Paschal Kyiiripuo Kyoore: A Study of Proverbs among the Dagara of West Africa - Gervase Angsotinge: "If You Do Good You Do it to Yourself and if You Do Evil You Do it to Yourself". Retribution in the Oral Narratives of the Dagaaba - Richard K. Baawobr: Paul's Call for Reconciliation and its Relevance for the Church with Particular Reference to Africa - Edward Tengan: Conversion and Transformation of Worldviews. The Case of the Dagara of Northwest Ghana - Fabian N. Dapila: Evangelizing the Dagaaba Through Bible Translation. Then and Now - Gregory B. Dongkore: Quality Teaching and Education in Northern Ghana. The Role of the Church - Africanus L. Diedong: Role of Christian Education for Sustainable Development in Northern Ghana - Nora Kofognotera Nonterah: The Use of Religious Education in Fostering Inter-Religious Peace in Ghana - Aloysius Porekuu: The Presence and Works of the Brothers of Immaculate Conception (FIC) in Ghana - Isidore Lobnibe: "Were It Not in the Bush, Will A Man Abandon His Wife This Way?" Northern Immigrants and the Dilemmas of Social Reproduction in the Forest Transition Zone of Ghana - Gariba B. Abdul-Korah: Shifting and Contested Relationships. Migration, Gender, and Family Economy among the Dagaaba in the Twentieth Century.