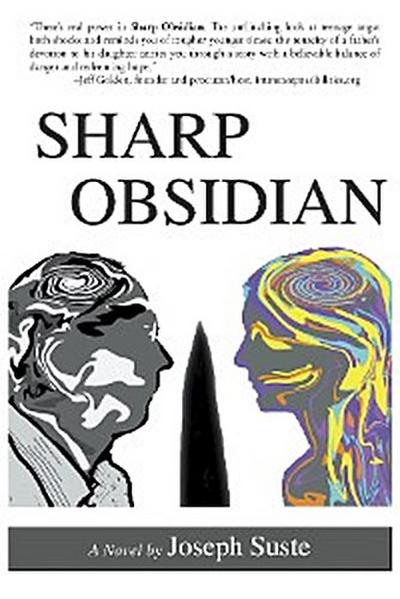 Sharp Obsidian lays bare the inner struggles of a father and his strong-willed teenage daughter when she begins to test life’s boundaries. Her father refuses to let destructive influences twist her morals, and dispirited, he commits his daughter to a teen recovery camp. She is indignant but meets the challenge with grit, uncovers her true essence, and matures into a savvy young woman

Julia – A headstrong fourteen-year-old challenging her parents for control as she experiments with life’s temptations. If you are fourteen, have ever been fourteen or are the parent of a fourteen-year-old, you will find a connection to Julia.

Steven – Julia’s father, frightened by the choices his daughter is making and determined to protect her. Any father of a teenage daughter will understand where Steven is coming from and recognize his fear.

Joseph Suste is an engineer, actor, playwright, fiction writer and poet. His short stories and social commentaries have been published in the Medford Mail Tribune and the Southern Oregon University school paper. He has been a radio announcer, performs in community theatre, and is active in a theatrical group acting-out poetry He resides with his wife and daughters on a ten acre mini-ranch on the outskirts of Medford, Oregon.

“There’s real power in Sharp Obsidian. The unflinching look at teenage angst both shocks and reminds you of rougher younger times; the tenacity of a father’s devotion to his daughter carries you through a story with a believable balance of danger and redeeming hope.”