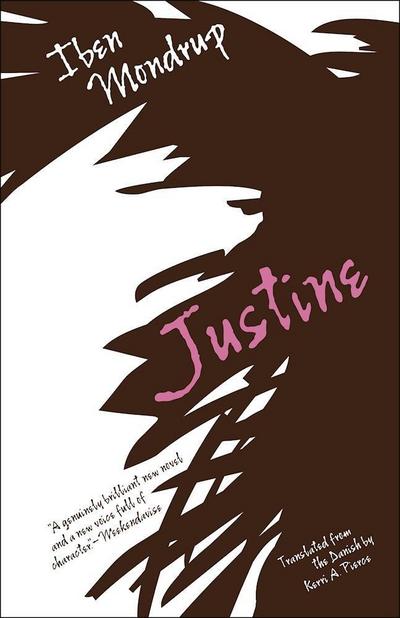 A stylistically brilliant look at the male-dominated art world, madness, and identity.

"When Mondru's prose is ablaze, cruising around with her inside a bruised and beaten artist’s soul is a veritable party. . . . By God she's a great prose stylist full of character."—Politiken

Stylistically provocative, Justine tells the story of a young female artist whose life is upended when her house burns down with all of the artworks for her upcoming exhibit inside. With little time left to recreate every-thing she's lost, Justine embarks on a series of sexual escapades with a sort of doomed intensity that foreshadows the novel’s final, dark twist.

Through flashbacks and fragmented memories, we see Justine as a student at the Art Academy first discovering the misogynistic order that rules the Danish art world, and later on as she constantly challenges its expectations—both in the studio and in bed.

Iben Mondrup is a trained visual artist from The Royal Danish Academy of Fine Arts who is also the author of four novels, including Justine, its sequel, and Godhavn.

Kerri A. Pierce has published translations from seven different languages in a variety of genres—fiction and nonfiction, novel and short story. Her translation of The Faster I Walk, The Smaller I Am by Kjersti A. Skomsvold was a finalist for the International IMPAC Dublin Literary Award.