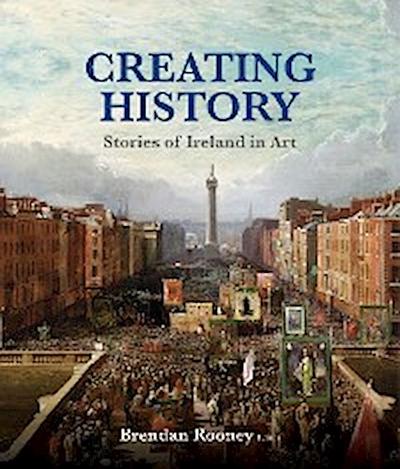 With chapters from leading Irish historians, including Roy Foster, Tom Dunne and Róisín Kennedy, Creating History delivers fascinating assessments that situate Ireland’s claim to independence through the historical significance and aesthetic value of some of Ireland’s major artistic works.

Upon leaving the National Gallery in Dublin during Easter week 1916, its registrar James Stephens was struck by ‘the rumour of death and war’ that gripped the air; one hundred years on, the National Gallery will evaluate these seismic historical events in its principal contribution to Ireland’s Decade of Centenaries in both a powerful new exhibition and stunning book, Creating History: Stories of Ireland in Art.
The National Gallery’s exhibition comprises 54 paintings spanning the 17th century to the 1930s, depicting or inspired by episodes in Irish history from the arrival of St Patrick to the establishment of the Free State. Jan Wyck, James Wheatley, John Lavery, Sean Keating, William Orpen and Jack B. Yeats are some of the major artists represented—their masterworks are lavishly reproduced to stunning effect alongside essays from today’s leading art critics. The exemplary contributors to feature – among them Tom Dunne, Ruth Kenny, Róisín Kennedy and Roy Foster – deliver fascinating assessments that situate the Easter Rising and Ireland’s claim to independence through the historical significance and aesthetic value of Ireland’s major artistic works. While the exhibition will run from 8 October 2016 to 17 January 2017, Creating History: Stories of Ireland in Art is set to be the National Gallery’s enduring tribute to the events of 1916, and will constitute a lasting legacy.