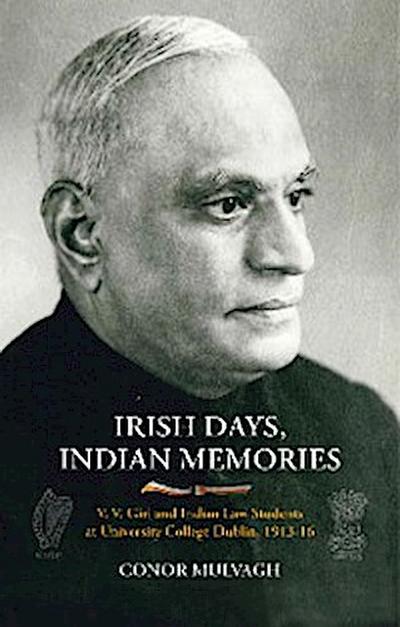 Irish Days, Indian Memories tells the little-known story of the fourth President of India and fellow Indian Law students attending UCD and King’s Inns during the dramatic years of 1913-1916. Diaries, letters and college records reveal unique insights into student life and the Indian students’ reaction to the political violence of the period. It provides a rare international perspective which inspired India’s independence movement.

Irish Days, Indian Memories offers a unique insight into an unexpectedly momentous facet of Dublin’s political and student life from 1913 to the end of the turbulent year that was 1916. V.V. Giri, fourth President of India (1969-74), who would later say of himself ‘when I am not an Indian, I am an Irishman’, and a group of twelve Indian law students at King’s Inns and University College Dublin, witnessed and participated in the events of these dramatic years. Drawn from diaries, letters, military and university records, their memories of the Dublin Lockout, the Irish Volunteers, the Easter Rising, student integration and subversion provide a fascinating perspective on life inside and outside the university.

This intersection with Ireland’s wartime and insurrectionary experience inspired V.V. Giri’s work for the Indian independence movement and had a profound effect on his fellow students. Through the eyes of Giri, his countrymen, and Conor Mulvagh’s expert research, a vivid and neglected narrative on 1916 is finally uncovered.