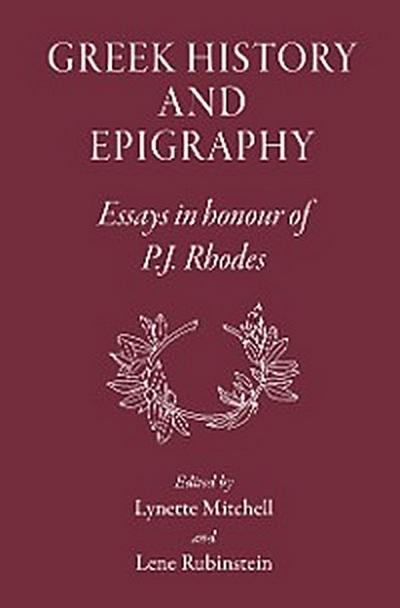 This important volume collects essays on topics in Greek history and epigraphy by an international cast of highly respected historians and epigraphers. Contributions include new and authoritative papers on Athenian politics and political institutions, the language and significance of honorific decrees, the role of inscriptions in the Athenian democratic state and elsewhere, as well as analyses of the methods for interpreting them. Together this collection represents an appropriate celebration of the work of the distinguished historian Professor Peter Rhodes.
Introduction - Lynette Mitchell and Lene Rubinstein The rules of the game: three studies in friendship, equality and politics - Lynette Mitchell City elites and the administration of the Attalid kingdom after the peace of Apameia evidence, research and methodological thoughts - Boris Dreyer Andragathia and arete - David Whitehead The crowning of Amphiaraos - Adele C. Scafuro Nothing to do with democracy: 'Formulae of Disclosure' and the Athenian epigraphic habit - James Sickinger The politics of an epigraphic habit: the case of Thasos - Robin Osborne Ateleia grants and their enforcement in the Classical and early Hellenistic periods - Lene Rubinstein A Note on Agyrrhios' Grain-Tax Law of 374/3 - Mogens Herman Hansen Attic public inscriptions of the fifth-century BC in Ionic script - A.P. Matthaiou The Gadatas letter - Christopher Tuplin Unpublished ephebic list in the Benakion museum of Kalamata - Andronike Makres Athenian ostracism and ostraka: some historical and statistical observations - Valerij Gushchin Thucydides and the Athenian boule - Council of Five Hundred - Simon Hornblower IG ii2 236 and Philip's common peace of 337 - Ian Worthington Writing Greek history: an agenda for the next generation - J.K. Davies