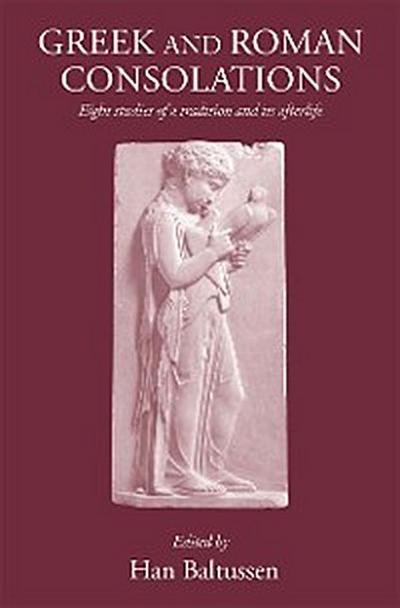 In the Ancient World death came - on average - at a far earlier age than in today's West, and without the authoritative warnings given by modern medicine. Consolation for the trauma of loss had, accordingly, a more prominent role to play. This volume presents eight original studies on consolatory writings from ancient Greek, Roman, early Christian and Arabic societies. The authors include internationally recognised authorities in the field. They offer insight into the ancient experience of loss and the methods used to palliate it. They explore how far there was a consolatory 'genre', involving letters, funerary oratory, epicedia, and philosophical prose. Focusing on responses to grief in numerous ancient authors, this volume finds elements of continuity and of individual variety in modes of consolation, and reveals instructive tensions between the commonplace and the personal.
Introduction - Han Baltussen 1 Towards a Genre of Consolation -
J. H. D. Scourfield 2 Mourning and Consolation in Greek Tragedy: The rejection of comfort -
James H. K. O. Chong-Gossard 3 Cicero's Consolatio ad se: Character, purpose and impact of a curious treatise -
Han Baltussen 4 Seneca the Consoler? A New Reading of his Consolatory Writings -
Marcus Wilson 5 The Consolatio ad Apollonium: Therapy for the dead -
George Boys-Stones 6 The Grieving Self: Reflections on Lucian's On Mourning and the consolatory tradition -
David Konstan 7 Continuity and Transformation of Ancient Consolation in Augustine of Hippo -
Josef Lossl 8 Arabic Ethics and the Limits of Philosophical Consolation -
Peter Adamson