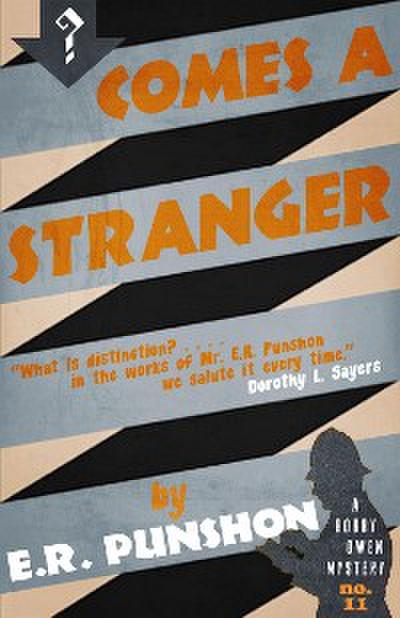 “You see,” Miss Kayne said, “I committed a murder once myself.”

Miss Kayne’s proud boast to Detective-Sergeant Bobby Owen is that she has committed the Perfect Murder - a crime with no clues. Bobby thinks at first it is a macabre joke, but before long a body is reportedly found, stabbed in the world-famous Kayne Library. When Bobby gets to the scene, the corpse has disappeared. But instead Miss Kayne’s cousin, Nat, is found in a nearby country lane - shot through the heart. Were the two murders connected - or were there even two? Bobby finds himself embroiled in one of the most ingenious and sinister cases of his career. Can he prove this was not a case of Perfect Murder?

Comes a Stranger, originally published in 1938, is the eleventh novel in the Bobby Owen mystery series. This new edition features an introduction by crime fiction historian Curtis Evans.

“What is distinction? The few who achieve it step - plot or no plot - unquestioned into the first rank… in the works of Mr. E.R. Punshon we salute it every time.” Dorothy L. Sayers