The Politics of Deconstruction 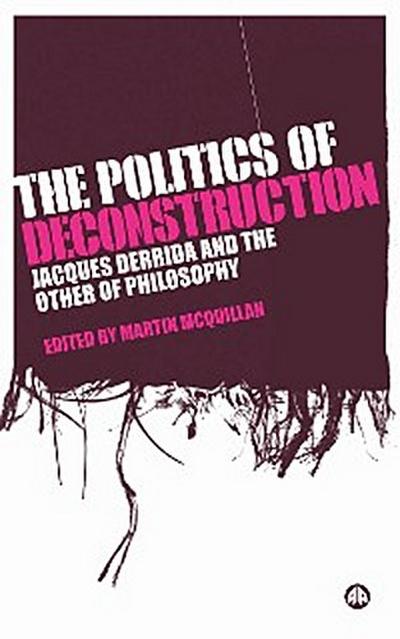 Jacques Derrida has had a huge influence on contemporary political theory and political philosophy. Derrida's thinking has inspired Slavoj Zizek, Richard Rorty, Ernesto Laclau, Judith Butler and many more contemporary theorists. This book brings together a first class line up of Derrida scholars to develop a deconstructive approach to politics.

Deconstruction examines the internal logic of any given text or discourse. It helps us analyse the contradictions inherent in all schools of thought, and as such it has proved revolutionary in political analysis, particularly ideology critique.

This book is ideal for all students of political theory, and anyone looking for an accessible guide to Derrida's thinking and how it can be used as a radical tool for political analysis.

The Day After Tomorrow… Or, the Deconstruction of the Future by Martin McQuillan

2. On the Multiple Senses of Democracy by Jean-Luc Nancy

3. The Art of the Impossible? by Derek Attridge

5. The Crisis of Critique by Robert Bernasconi

6. The Popularity of Language: Rousseau and the Mother Tongue by Anne Berger

7. In Light of Light: On Jan Pato_ka’s notion of Europe by Rodolphe Gasché

8. Phenomenology to Come by Joanna Hodge

9. From (Within) Without, by Marc Froment-Meurice

10. Thinking (Through) the Desert, by Laurent Milesi

12. The irony of deconstruction and the example of Marx by Richard Beardsworth

13. Martin McQuillan, by Karl Marx and the Philosopher’s Stone, or, on Theory and Practice