How to Stay Sane in an Age of Division 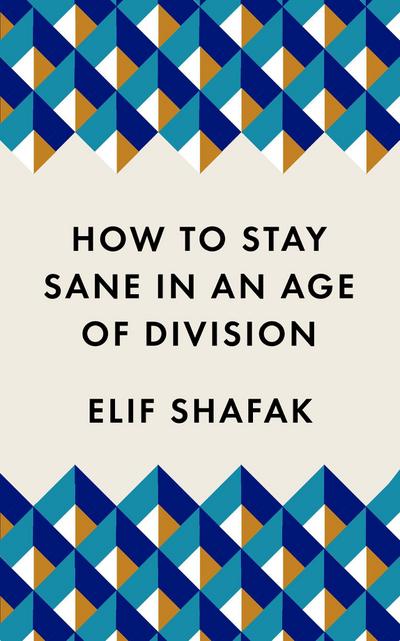 Shafak, ElifElif Shafak is an award-winning British-Turkish novelist and the most widely read female author in Turkey. She writes in both Turkish and English, and has published seventeen books, eleven of which are novels. Her work has been translated into 50 languages. Her latest novel 10 Minutes 38 Seconds in this Strange World was shortlisted for the Booker Prize and RSL Ondaatje Prize; and chosen Blackwell's Book of the Year. Her previous novel, The Forty Rules of Love was chosen by BBC among 100 Novels that Shaped Our World. Shafak holds a PhD in political science and she has taught at various universities in Turkey, the US and the UK, including St Anne's College, Oxford University, where she is an honorary fellow.

She is a member of Weforum Global Agenda Council on Creative Economy and a founding member of ECFR (European Council on Foreign Relations). An advocate for women's rights, LGBT rights and freedom of speech, Shafak is an inspiring public speaker and twice TED Global speaker, each time receiving a standing ovation. Shafak contributes to major publications around the world and she was awarded the medal of Chevalier de l'Ordre des Arts et des Lettres and is a Fellow of the Royal Society of Literature. In 2017 she was chosen by Politico as one of the twelve people "who will give you a much needed lift of the heart". Shafak has judged numerous literary prizes, and chaired the Wellcome Prize and is presently judging the Orwell Prize. elifshafak.com
'Elegant ... calm and generous' Mary Beard, Guardian

Ours is the age of contagious anxiety. We feel overwhelmed by the events around us, by injustice, by suffering, by an endless feeling of crisis. So, how can we nurture the parts of ourselves that hope, trust and believe in something better? And how can we stay sane in this age of division?

In this powerful, uplifting plea for conscious optimism, Booker Prize-nominated novelist and activist Elif Shafak draws on her own memories and delves into the power of stories to bring us together. In the process, she reveals how listening to each other can nurture democracy, empathy and our faith in a kinder and wiser future.
The Booker Prize-shortlisted author on how staying optimistic can make our world better