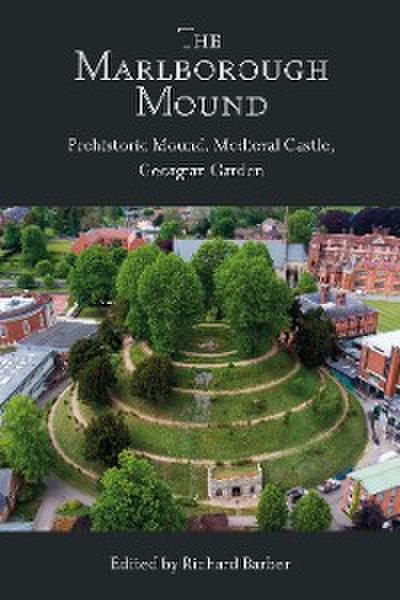 The Marlborough Mound has recently been recognised as one of the most important monuments in the group around Stonehenge. It was also a medieval castle and a feature in a major 17th century garden. This is the first comprehensive history of this extraordinary site.
Marlborough Mound, standing among the buildings of Marlborough College, has attracted little attention until recently. Records showed it to be the motte of a Norman castle, of which there were no visible remains. The local historians and archaeologists who had investigated it had found very little in the way of archaeological evidence beyond a few prehistoric antler picks, the odd Roman coin, and a scatter of medieval pottery.
It was to be archaeology which provided the most dramatic discovery after the Mound Trust began to restore the mound in 2003. English Heritage were investigating Silbury Hill, and arranged to take cores from the Mound for dating purposes. The results were remarkable, as they showed that the Mound was almost a twin of Silbury Hill and therefore belonged to the extraordinary assembly of prehistoric monuments centred on Stonehenge.

For the medieval period, this book brings together for the ﬁrst time all that we know about the castle from the royal records and from chronicles. These show that it was for a time one of the major royal castles in the land. Most of the English kings from William I to Edward III spent time here. For Henry III and his queen Eleanor of Provence, it was their favourite castle after Windsor. It marks the end of the ﬁrst stage of the work of the Mound Trust, which, following the restoration, turns to its second objective of promoting public knowledge of the Mound based on scholarly research.

As to its ﬁnal form as a garden mound next to the house of the dukes of Somerset, in the eighteenth century, this emerges from letters and even poems, and from the recent restoration. Much of this has been slow and painstaking work, however, involving the removal of the trees which endangered the structure of the Mound, the recutting of the spiral path and the careful replanting of the whole area with suitable vegetation. By doing this, the shape of the Mound as a garden feature has re-emerged, and can now be seen clearly.

This book marks the end of the ﬁrst stage of the work of the Mound Trust, which, following the restoration, turns to its second objective of promoting public knowledge of the Mound based on scholarly research.

1. 'One remarkable earthen-work': The Neolithic Origins of the Marlborough Mound

Afterword: The Round Mound Project

3. Marlborough Castle in the Middle Ages

4. The Mound as a Garden Feature

A Inquisition into the State of Marlborough Castle, 11 September 1327