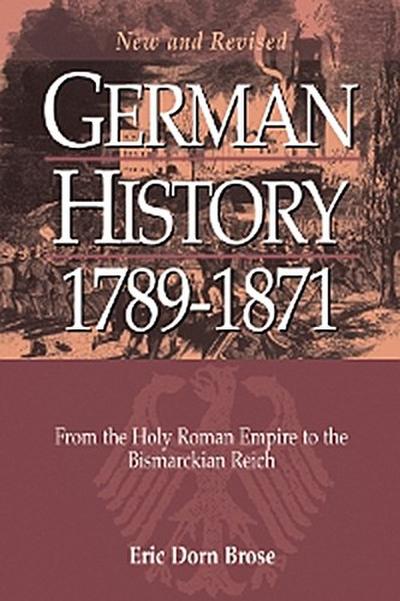 During recent years, there has been a noticeable increase in interest in the nineteenth century, resulting in many fine monographs. However, these studies often gravitate toward Prussia or treat Germany's southern and northern regions as separate entities or else are thematically compartmentalized. This book overcomes these divisions, offering a wide-ranging account of this revolutionary century and skillfully combining narrative with analysis. Its lively style makes it very accessible and ideal for all students of nineteenth-century Germany.

Chapter 1. Germany before the French Revolution
Chapter 2. The Decline and Fall of the Holy Roman Empire
Chapter 3. Napoleonic Conquests and the Era of Reform
Chapter 4. Patriotism, Nationalism, and the Liberation of Germany

Chapter 5. The German Confederation and Conservatism Triumphant
Chapter 6. Political Life in the Era of Carlsbad
Chapter 7. Society and Economy on the Eve of Early Industrialization
Chapter 8. Art and the Spirit of the Times
Chapter 9. The Revolutions of 1830

Chapter 14. The Revolutions of 1848-1849 and Their Aftermath
Chapter 15. A New Realism for a New Era
Chapter 16. Social Change in Town and Country
Chapter 17. The View from the Atelier
Chapter 18. The Division of German Europe and the Bismarckian Synthesis