No One Belongs Here More Than You 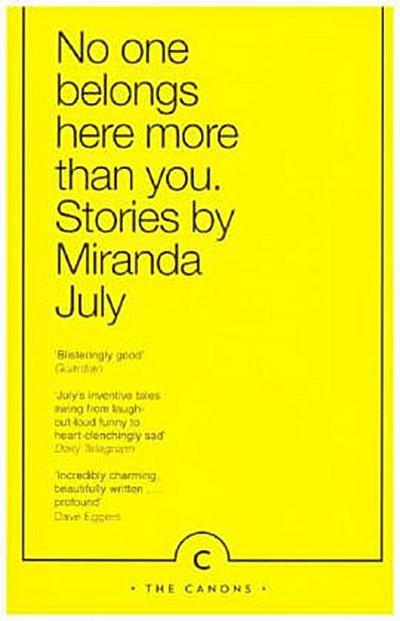 July, MirandaMiranda July is a filmmaker, artist and writer. She wrote, directed and starred in The Future (2011) and Me and You and Everyone We Know (2005), which won a special jury prize at the Sundance Film Festival and four prizes at the Cannes Film Festival, including the Camera d'Or. July's fiction has appeared in The Paris Review, Harper's and The New Yorker. Her collection No One Belongs Here More Than You (2007) won the Frank O'Connor International Short Story Award and has been published in twenty-three countries. The nonfictional It Chooses You was published in 2011. In 2000 July created the participatory website Learning to Love You More with the artist Harrel Fletcher, and a companion book was published in 2007; the work is now in the collection of the San Francisco Museum of Modern Art. She designed Eleven Heavy Things, an interactive sculpture garden, for the 2009 Venice Biennale, and in 2013 more than a hundred thousand people subscribed to her e-mail based artwork We Think Alone. This autumn she debuts the audience-participatory performance, New Society, and launches Somebody, a messaging service created with support from Miu Miu. Raised in Berkeley, California, July lives in Los Angeles.

In her remarkable stories of seemingly ordinary people living extraordinary lives, Miranda July reveals how a single moment can change everything. Whether writing about a middle-aged woman's obsession with Prince William or an aging bachelor who has never been in love, the result is startling, tender and sexy by turns. One of the most acclaimed and successful short-story collections, No One Belongs Here More Than You confirms Miranda July as a spectacularly original, iconic and important voice today.