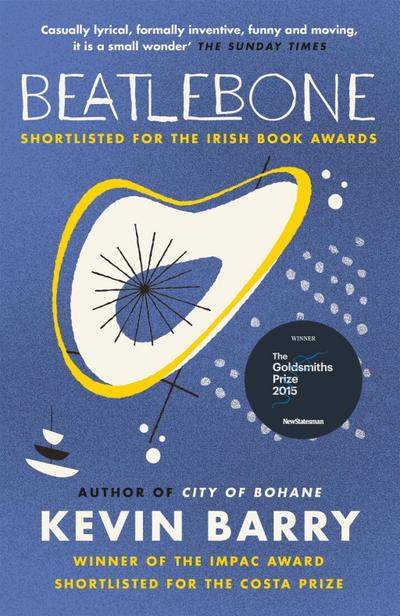 Barry, KevinKevin Barry is the author of the novels Beatlebone, City of Bohane and Night Boat to Tangier and the story collections Dark Lies the Island and There Are Little Kingdoms. His awards include the IMPAC Dublin Literary Award, the Goldsmiths Prize, the Sunday Times EFG Short Story Prize and the Lannan Foundation Literary Award. His stories and essays have appeared in the New Yorker, Granta and elsewhere. He also works as a playwright and screenwriter, and he lives in County Sligo, Ireland. In 2019, Night Boat to Tangier was longlisted for the Booker Prize.

WINNER OF THE GOLDSMITHS PRIZE
SHORTLISTED FOR THE IRISH BOOK AWARDS

"John is so many miles from love now and home. This is the story of his strangest trip."

A novel of family, ghosts, love, music and the quest for truth, Beatlebone recounts a wild journey through the west of Ireland in 1978. At its helm is John, a maddened genius fleeing fame and seeking peace. With his deadpan Irish driver, Cornelius, at his side, John is hellbent on reaching the Island of Dorinish, an assignment he arranged ten years before.

Lyrical, freewheeling, quixotic and fun, Beatlebone is a sad and beautiful comedy.