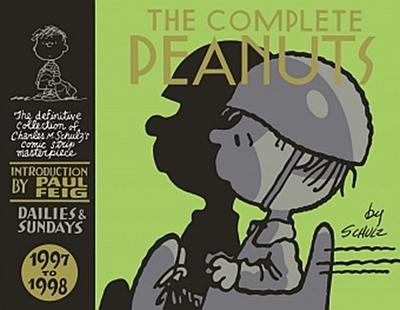 Schulz, Charles M.
Charles M. Schulz was born in Minneapolis, Minnesota in 1922 and grew up in Saint Paul. He gained a reputation worldwide as a cartoonist for his work on Peanuts. He died in 2000.
Feig, Paul
Paul Feig was born in Michigan. He co-created the seminal television series Freaks and Geeks, directed the blockbuster hit Bridesmaids in 2011, and has been nominated for five Emmy awards. Feig produced the upcomingPeanuts animated film and is helming the new Ghostbusters movie.
Peanuts goes noir when Charlie Brown gets caught up in a fake celebrity autograph ring and Linus starts his own church of the Great Pumpkin - until believers declare him a false prophet. In comedic counterpoint, Snoopy gets his driving license and Rerun pursues a comics career. Meanwhile, Olaf and Andy go on a quest for the only pop culture anthropomorph more famous than their brother - and 'Crybaby' Boobie makes a comeback.
Part of Canongate's highly collectible and highly praised series, with an introduction by Paul Feig