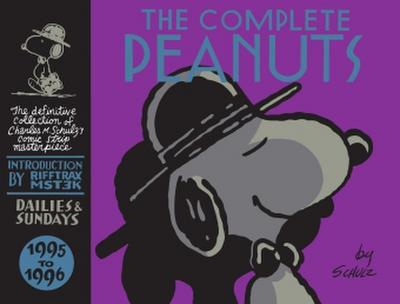 Schulz, Charles M.
Charles M. Schulz was born in Minneapolis, Minnesota in 1922 and grew up in Saint Paul. He gained a reputation worldwide as a cartoonist for his work on Peanuts. He died in 2000.
'Peanuts was, is, and will continue to be the finest comic in the world. Bravo' RAY BRADBURY

In The Complete Peanuts: 1995-1996 (Vol. 23), Charlie Brown starts taking dancing classes and is asked to the sweetheart ball! The World Famous Attorney handles some tough cases, Rerun wants Snoopy to come out and play and Linus hears coyotes howling at night. This is the antepenultimate twenty-third volume of the New York Times best-selling series that will conclude in 2016, collecting every single one of the 18,000-plus strips created by Schulz from 1950-2000.
Part of Canongate's highly collectible and highly praised series, with an introduction by RiffTrax