The History of William Marshal 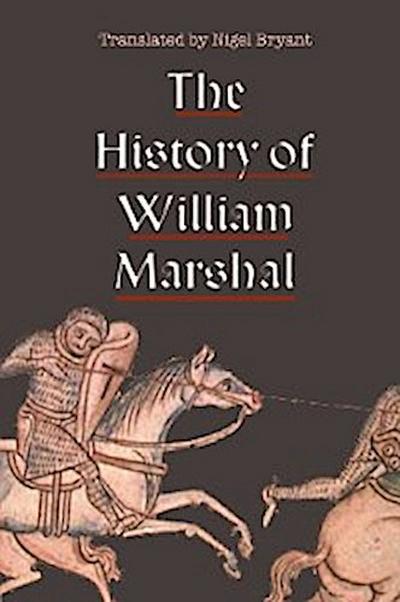 The career of William Marshal, who rose from being the penniless, landless younger son of a middle-ranking nobleman to be regent of England in the minority of Henry III, is one of the most extraordinary stories of the Middle Ages.His biography was completed shortly after his death by a household minstrel and we are fortunate that it survives to give a unique portrait of a twelfth-century knight's life in the early days of tournaments and chivalry as wellas his career in warfare and politics.
The History of William Marshal is the earliest surviving biography of a medieval knight -- indeed it is the first biography of a layman in the vernacular in European history. Composed in verse in the 1220s just a few years after his death, it is a major primary source not simply for its subject's life but for the exceptionally stormy period he had had to navigate. It could hardly be other than major, given that its subject was regarded as the greatest knight who ever lived and that he rose in the course of his long life to be a central figure in the reigns of no fewer than four kings: Henry II, Richard Lionheart, John and Henry III. This remarkable biography was brought to light inthe late nineteenth century thanks to a determined hunt for the manuscript by its first editor, the eminent French scholar Paul Meyer. It gives a vigorous account of events, full of vivid detail and passionate comment and frequent flashes of humour. And it gives revelatory insights into the attitudes and perceptions of the time, especially into the experience and nature of warfare in the late twelfth and early thirteenth centuries.
But while its quality and value have been long acknowledged, the poem has sometimes been deemed less than impartial and objective. Commissioned as it was by Marshal's own son, and intended not least for his family's fond enjoyment, it is little surprise that the poem's adulation of its subject is rarely qualified by regrets for failings or what are nowadays referred to as "errors of judgement". Marshal is presented as -- to all intents and purposes -- flawless: not simplya magnificent warrior, supreme in tournaments and battles alike, but a paragon of the key chivalric virtues of prowess, largesse and unfailing loyalty. But this is not surprising: the idea of the fallible hero is a modern invention, and the writer of this work - like Marshal himself -- was steeped in the old ideals of the chansons de geste as well as the more recent ideology of chivalry. In any case, there can be no denying that Marshal's achievements -- and sometimes his behaviour -- were by any standards extraordinary and seen as such by his contemporaries, and the poem corresponds with what we know of his life from other sources.

Few other medieval biographies have the immediacy of this celebration of Marshal's career, based not least on stories told by Marshal himself and those close to him, and it is made available here for the first time in a modern prose translation.
Introduction

The History of William Marshal