Sources and Methods in African History 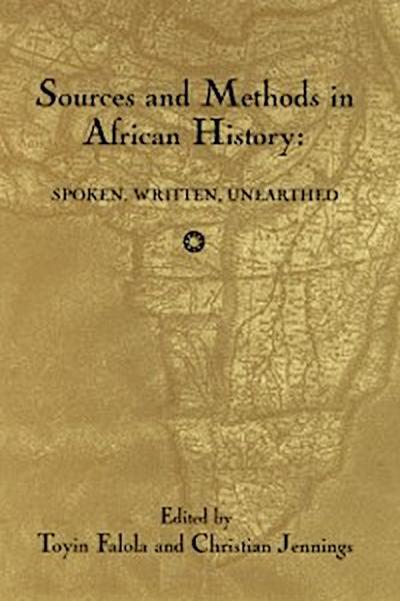 
This book is both a snapshot of current academic practice and an attempt to sort through some of the problems scholars face within this unfolding web of sources and methods. The book is divided into five sections, each of which begins with a short introduction by a distinguished Africanist scholar. The first section deals with archaeological contributions to historical research. The second section examines the methodologies involved in deciphering historically accurate African ethnic identities from the records of the trans-Atlantic slave trade. The third section mines old documentary sources for new historical perspectives. The fourth section deals with the method most often associated with African historians, that of drawing historical data from oral tradition. The fifth section is devoted to essays that present innovative sources and methods for African historical research.

Together, the essays in this cutting-edge volume represent the current state of the art in African historical research.

Toyin Falola is the Jacob and Frances Sanger Mossiker Chair in the Humanities and University Distinguished Teaching Professor at the University of Texas at Austin.

Christian Jennings is a doctoral candidate in history at the University of Texas at Austin.

Trouble with Siblings: Archaeological and Historical Interpretation of the West African Past - Christopher DeCorse

For Trinkers Such As Beads: A Revalorization of Khosian Labor in Colonial Southern Africa - Edwin Wilmsen

Pathways to African Ethnicity in the Americas: African National Associations in Cuba during Slavery - Matt Childs

Africa in Louisiana: In Search of "Bambara" and Creole Identities in Literary and Statistical Sources - Kevin Roberts

Kingship and the Mediators of the Past: Oral Tradition and Ritual Performance in Nupeland, Nigeria - Constanze Weise

Passages in a Struggle over the Past: Stories of Maji Maji in Njombe, Tanzania - James Giblin

Maisha: Life History and the History of Livelihood along the TAZARA Railway in Tanzania - Jamie Monson

Electricity Networks in Africa: A Comparative Study, or How to Write Social History from Economic Sources - Catherine Coquery-Vidrovitch