The Complete Story of the Grail 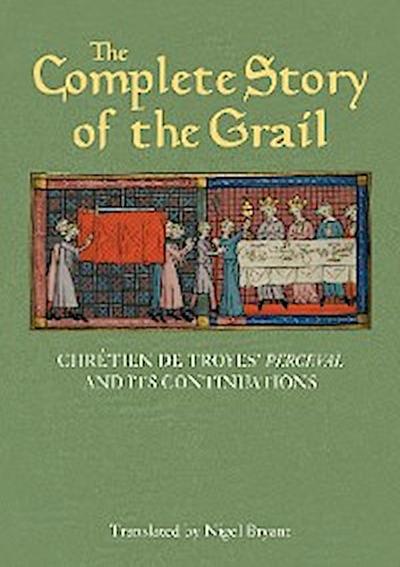 The mysterious and haunting Grail makes its first appearance in literature in Chrétien de Troyes' Perceval at the end of the twelfth century. But Chrétien never finished his poem, leaving an unresolved story and an incomplete picture of the Grail. It was, however, far too attractive an idea to leave. Not only did it inspire quite separate works; his own unfinished poem was continued and finally completed by no fewer than four other writers.


The Complete Story of the Grail is the first ever translation of the whole of the rich and compelling body of tales contained in Chrétien's poem and its four
Continuations, which are finally attracting the scholarly attention they deserve. Besides Chrétien's original text, there are the anonymous
First Continuation (translated here in its fullest version), the
Second Continuation attributed to Wauchier de Denain, and the intriguing
Third and
Fourth Continuations - probably written simultaneously, with no knowledge of each other's work - by Manessier and Gerbert de Montreuil. Two other poets were drawn to create preludes explaining the background to Chrétien's story, and translated here also are their works:
The Elucidation Prologue and
Bliocadran.

Only in this,
The Story of the Grail's complete form, can the reader appreciate the narrative skill and invention of the medieval poets and their surprising responses to Chrétien's theme - not least their crucial focus on the knight as a crusader. Equally, Chrétien's original poem was almost always copied in conjunction withone or more of the
Continuations, so this translation represents how most medieval readers would have encountered it.

Nigel Bryant's previous translations from Medieval French include
Perlesvaus - the High Bookof the Grail, Robert de Boron's trilogy
Merlin and the Grail, the
Medieval Romance of Alexander,
The True Chronicles of Jean le Bel and
Perceforest.

Appendix 3: Independent conclusion to the Second Continuation in the Bern manuscript [Burgerbibliothek 113]