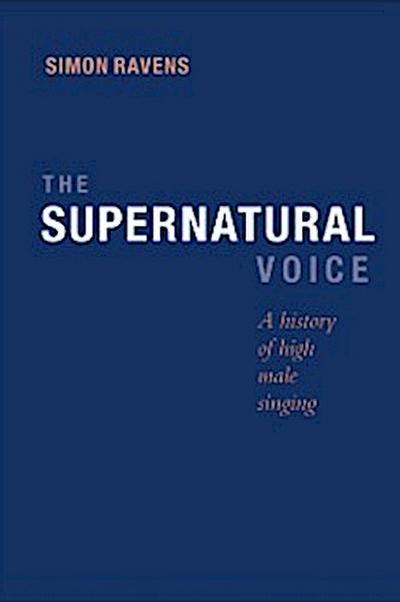 Covering a period from the Ancient World to the present day, the book suggests that until very recently, falsettists and counter-tenors have been distinct vocal genres.
`The use of high male voices in the past has long been one of the most seriously misunderstood areas of musical scholarship and practice. In opening up this rich subject (to readers of all sorts) with refreshingly clear perspectives and plenty of new material, Simon Ravens' well-researched book goes a very long way to rectifying matters. Ravens writes damnably well, and if the story that emerges is necessarily a complex one, his treatment of it is always engagingly comprehensible.' ANDREW PARROTT


Tracing the origins, influences and development of falsetto singing in Western music, Simon Ravens offers a revisionist history of high male singing from the Ancient Greeks to Michael Jackson. This history embraces not just singers of counter-tenor and alto parts up to and including our own time but the castrati of the Ancient world, the male sopranists of late Medieval and Renaissance Europe, and the dual-register tenors of the Baroque and Classical periods. Musical aesthetics aside, to understand the changing ways men have sung high, it is also vital to address extra-musical factors - which are themselves in a state of flux. Tothis end, Ravens illuminates his chronological survey by exploring topics as diverse as human physiology, the stereotyping of national characters, gender identity, and the changing of boys' voices. The result is a complex and fascinating history sure to appeal not only to music scholars but to performers and all those with an interest particularly in early music.

Simon Ravens is a performer, writer, and director of Musica Contexta, with whom hehas performed in Britain and Europe, regularly broadcast, and made numerous acclaimed recordings. Ravens had previously founded and directed Australasia's foremost early music choir, the Tudor Consort. Between 2002 and 2007 his regular monthly column
Ravens View appeared in the
Early Music Review, to which he still regularly contributes.


Introduction: A Declaration of Disinterest

The Discovery of Alfred Deller

The Ancient World to the Middle Ages