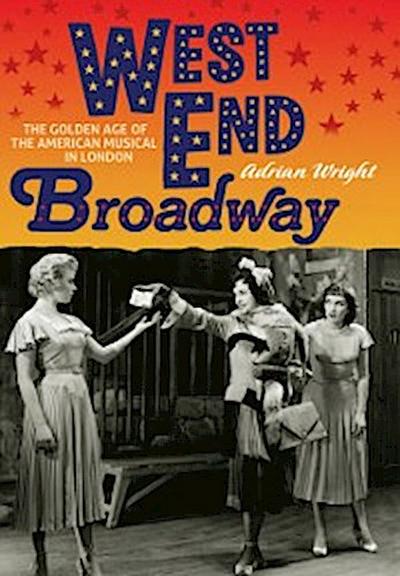 A history and re-evaluation of the American musical in London between 1945 and 1972, a unique panoramic essay on British theatre of the Golden Age.
West End Broadway is the first book to deal specifically with the 'Golden Age' of American musicals in London. Here is a history and a re-evaluation not only of the British productions of Broadway's most popular product butof the works themselves, beginning with a brief account of the origins of the genre and of the shows seen during World War II. The difficult conditions of war-torn Britain prepared the ground for changes that would come with peace. While Britain clung to tried formulas, a refreshing breeze was blowing in from the Atlantic, altering the nature of British theatre by sending New York's commercially successful musicals to the West End. The wider relevance ofthis history is underscored, as is the fact that these works effectively imported American social history into the culture of a Britain coping with the aftermath of conflict. In London, critical reaction to Broadway musicals was often strikingly different from that awarded in New York, and Broadway success could result in West End failure, while off-Broadway shows struggled to gain hold in Britain.

West End Broadway discusses every American musical seen in London between 1945 and 1972. As the final works of Cole Porter and Irving Berlin made way for a new wave of writers and composers, the arrival of Rodgers and Hammerstein's Oklahoma! was celebrated as a breakthrough,heralding a period that included important works by Jule Styne, Leonard Bernstein, Betty Comden and Adolph Green, Robert Wright and George Forrest, Harold Rome, Frank Loesser, Alan Jay Lerner, Frederick Loewe, and the first stirrings of the next generation in Stephen Sondheim.

Offering a unique panoramic essay on British theatre of the Golden Age, West End Broadway is an authoritative, challenging and diverting contribution to an understanding of aforgotten aspect of the Broadway musical.

ADRIAN WRIGHT is the author of
Foreign Country: The Life of L.P. Hartley (1996),
John Lehmann: A Pagan Adventure (1998),
The Innumerable Dance: The Life and Work of William Alwyn (2008) and the novel
Maroon (2010). His previous book,
A Tanner's Worth of Tune (Boydell & Brewer, 2010), told the story of the post-war British musical. He lives in Norfolk, where he runs MustClose Saturday Records, a company dedicated to British musical theatre.