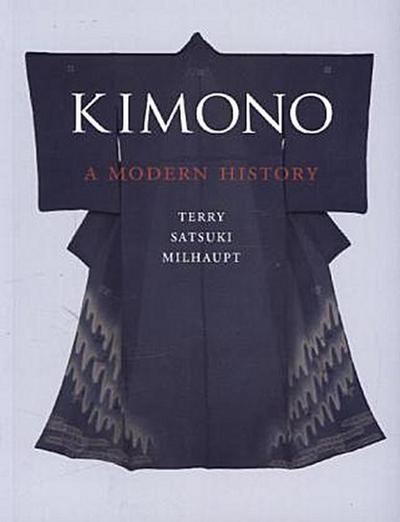 Kimono traces the transformation of the Japanese garment from everyday attire to National symbol, exploring the historic and contemporary use of this enduring cultural legacy.
What is the kimono? Everyday garment? Art object? Symbol of Japan? As Terry Satsuki Milhaupt explains in this book, the kimono has served all of these roles, its meaning changing across time and with the perspective of the wearer or viewer. Kimono: A Modern History traces the transformation of the kimono from everyday garment to national symbol of Japan. It begins by revealing the foundations of the modern kimono fashion industry in the 17th- and 18th-century. With Japans exposure to Western fashion in the 19th century, and Westerners contact with distinctive Japanese modes of dress and design, the kimono took on new associations and came to symbolize an exotic culture and an alluring female form. In the aftermath of the Second World War, the kimono industry was sustained through government support. The line between fashion and art became blurred, as kimonos produced by famous designers were collected for their beauty and displayed in museums, rather than being worn as clothing. Today, the kimono has once again taken on new dimensions, as the Internet and social media proliferate images of the kimono as a versatile garment to be integrated into a range of individual styles.Published to accompany the Kimono exhibition at the Metropolitan Museum of Art, New York, commencing in September 2014, Kimono: A Modern History not only tells the story of a distinctive garments ever-changing functions and image, but provides a novel perspective on Japans modernization and encounter with the West.