The Diaries of Emilio Renzi: A Day in the Life 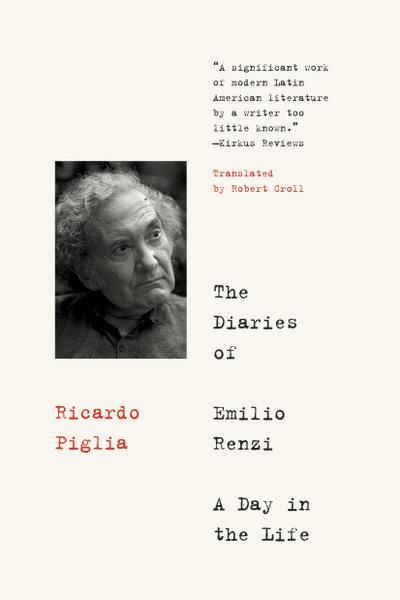 Robert Croll is a writer, translator, musician, and artist originally from Asheville, North Carolina. He first came to translation during his undergraduate studies at Amherst College, where he focused particularly on the short fiction of Julio Cortázar.

Sixty years in the making and the capstone of a monumental literary career, The Diaries of Emilio Renzi: A Day in the Life is the final volume of the autobiographical trilogy from the author who is considered Borges' heir and the vanguard of the Post-Boom generation of Latin American literature.

Is that why I write a diary? To capture-or reread-one of those days of unexpected happiness?

The final installment of Ricardo Piglia's lifelong compilation of journals completes the seemingly impossible project of documenting the entire life of a writer. A Day in the Life picks up the thread of Piglia's life in the 1980s until his death from ALS in 2017. Emilio Renzi, Piglia's literary alter ego, navigates the tumultuous ups and downs of a post-Peronist Argentina filled with political unrest, economic instability, and a burgeoning literary scene ready to make its mark on the rest of the world and escape the shadows of legendary authors Jorge Luis Borges and Roberto Arlt.

Renzi's peripatetic, drinking, philandering ways don't abate as he grows older, and we're exposed to the intrinsic insecurities that continually plague him even as fate tips in his favor and he goes on to win international literary prizes and becomes professor emeritus of Princeton University. His literary success is marred only by the disappointments and tragedies of his personal life as he deals with the death of friends and family, failed relationships, and the constant pecuniary struggles of a writer trying to live solely on his ability to produce art. The final sections of this ambitious project intimately trace the deterioration of Piglia's body after his diagnosis: My right hand is heavy and uncooperative but I can still write. When I can no longer. . . . The crowning achievement of a prolific, internationally acclaimed author, this third volume cements Ricardo Piglia's position as one of the most influential Latin American authors of the last century.

Praise for The Diaries of Emilio Renzi: A Day in the Life

"[A] posthumous autobiographical masterpiece. . . . [P]rofoundly moving. A meditation on both the accumulation and ephemerality of time, Piglia's final work is a brilliant addition to world literature."
-Publishers Weekly, Starred Review

"Filled with literary aperçus and fragments of history: an elegant, affecting close to a masterwork."
-Kirkus Reviews, Starred Review

"Much of the fascinating material is to be found in his brief appreciations and observations, such as notes on authors and his reading, but the life-story-of someone who has dedicated himself entirely to literature-also comes across, and it is thoroughly engaging, over all three volumes of this larger work.... A fine conclusion to this diary-trilogy, and a fascinating companion piece to this author and his work."
-M. A. Orthofer, The Complete Review

Praise for The Diaries of Emilio Renzi

"Splendidly crafted and interspliced with essays and stories, this beguiling work is to a diary as Piglia is to 'Emilio Renzi': a lifelong alter ego, a highly self-conscious shadow volume that brings to bear all of Pig

Sixty years in the making and the capstone of a monumental literary career, The Diaries of Emilio Renzi: A Day in the Life is the final volume of the autobiographical trilogy from the author who is considered Borges' heir and the vanguard of the Post-Boom generation of Latin American literature.