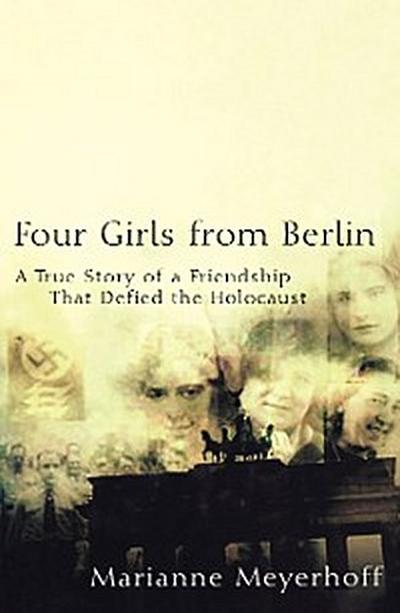 A pair of silver Regency candlesticks.

More than a thousand documents, letters, and photographs

Lotte Meyerhoff's best friends risked their lives in Nazi Germany to safeguard these and other treasured heirlooms and mementos from her family and return them to her after the war. The Holocaust had left Lotte the lone survivor of her family, and these precious objects gave her back a crucial piece of her past. Four Girls from Berlin vividly recreates that past and tells the story of Lotte and her courageous non-Jewish friends Ilonka, Erica, and Ursula as they lived under the shadow of Hitler in Berlin.

Written by Lotte's daughter, Marianne, this powerful memoir celebrates the unseverable bonds of friendship and a rich family legacy the Holocaust could not destroy.

"What a delightful book, and important, too. It gives us the courage and inspiration to utterly reject the fatalistic idea that fratricide, polemic, and enmity between Christians and Jews is inevitable and unchangeable. Finally, it reminds us never to forget or fail to appreciate those forces of light that bear witness to, and instill hope for, mankind and our world."--Rabbi Yechiel Eckstein, President, International Fellowship of Christians and Jews

"Four Girls From Berlin is an evocative story of friendship, challenged in the most sinister environment. For Christians, it echoes the words of Jesus, 'greater love hath no man than to lay down his life for his friends.' The friendship of these four women, three Christians and a Jew, speaks of a greater humanity that in the face of the Nazi horror could not be broken. I strongly recommend men and women of all faiths to learn from it."--The Venerable Lyle Dennen, Archdeacon, London, England