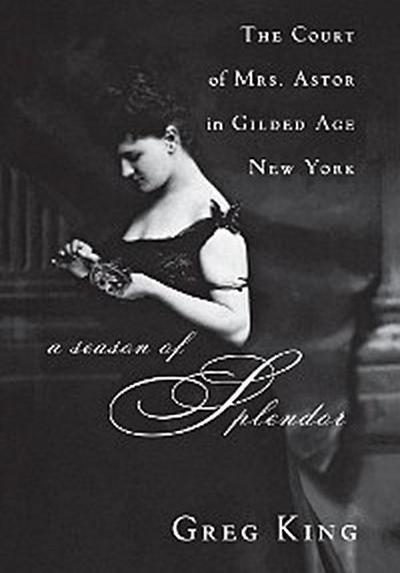 A Season of Splendor

Journey through the splendor and the excesses of the Gilded Age

"Every aspect of life in the Gilded Age took on deeper, transcendent meaning intended to prove the greatness of America: residences beautified their surroundings; works of art uplifted and were shared with the public; clothing exhibited evidence of breeding; jewelry testified to cultured taste and wealth; dinners demonstrated sophisticated palates; and balls rivaled those of European courts in their refinement. The message was unmistakable: the United States had arrived culturally, and Caroline Astor and her circle were intent on leading the nation to unimagined heights of glory."—From A Season of Splendor

Take a dazzling journey through the Gilded Age, the period from roughly the 1870s to 1914, when bluebloods from older, established families met the nouveau riche headlong—railway barons, steel magnates, and Wall Street speculators—and forged an uneasy and glittering new society in New York City. The best of the best were Caroline Astor's 400 families, and she shaped and ruled this high society with steel.

A Season of Splendor is a panoramic sweep across this sumptuous landscape, presenting the families, the wealth, the balls, the clothing, and the mansions in vivid detail—as well as the shocking end of the era with the sinking of the Titanic.