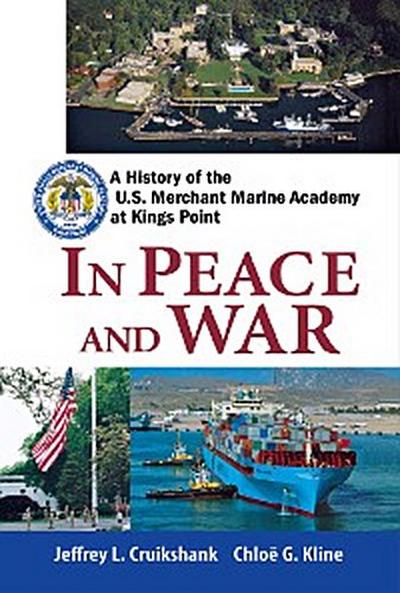 In Peace and War

Founded in 1937, the U.S. Merchant Marine Academy at Kings Point, New York, has trained more than 20,000 professional mariners—and, in the process, has weathered many turbulent times.

In Peace and War draws on extensive research—including archival work and interviews with past and present-day administrators, alumni, and current midshipmen—to document the Academy's evolution from its beginnings to the present.

This balanced and comprehensive work details the vision and contributions of determined leaders, both at Kings Point and in Washington, who shaped the Academy. It describes the evolution of the U.S. merchant marine, and explains how a tragic fire aboard the passenger ship SS Morro Castle off the coast of New Jersey—in which the shameful behavior of the ship's crew caused the unnecessary deaths of many passengers—led to the passage of the Merchant Marine Act in 1936, which paved the way for the Academy.

It details how Kings Point has adjusted its training and priorities to meet the evolving needs of the nation. For example: visual signaling training was added to the curriculum in response to the growing threat from German subs in the months leading up to World War II. In June 1940, Cadet William O'Reilly's frantic signaling from the SS Washington—a vessel carrying more than 1,700 refugees—averted its sinking by a hostile submarine.

From its inception, Kings Point has used the high seas as a campus, with its students shipping out for a full year on commercial vessels to receive a thorough grounding in practical seamanship. In wartime, this has meant that Kings Point cadets often have found themselves in harm's way, and some have paid the ultimate price. Between 1942 and 1945, for example, 142 Kings Point cadets were lost in action, and countless others survived attacks all around the world. At other times, the conflict has been closer to home. The book also describes the Academy's invaluable service after 9/11, when Kings Point personnel and vessels worked around the clock to ferry fire-fighters and rescue personnel to and from nearby Ground Zero in Lower Manhattan.

Using compelling examples, In Peace and War conveys the educational experience at the Academy today, including the regiment of midshipmen and the required Sea Year, both of which sharply distinguish Kings Point from almost all other educational institutions. It uses the stories of ten graduates in Norfolk, Virginia, to explain what today's "merchant marine" is, and to illustrate the wide range of careers and leadership roles for which the Academy prepares its students. Finally, the book details the dedication of the many alumni and other supporters who are committed to continuing Kings Point's contributions to the nation and the maritime industry, and to preserving the proud traditions of this venerable institution.