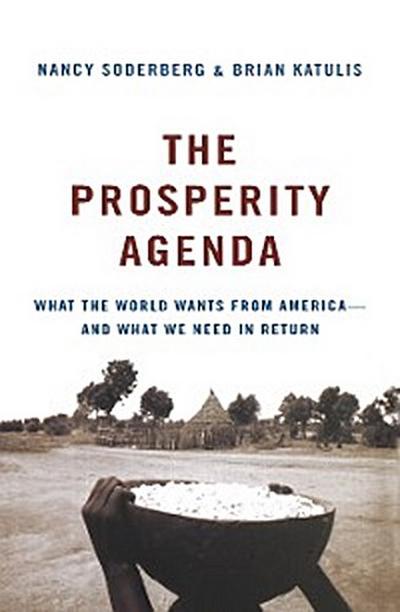 Following the devastating 2005 earthquake in Pakistan, the Bush administration pledged more than $500 million for earthquake relief and sent American helicopters and soldiers to help. Immediately afterward, polls showed that the number of Pakistanis with a favorable opinion of the United States had doubled to more than 46 percent. The Prosperity Agenda argues that this may be the best foreign policy moment of the entire Bush administration—at the cost of what we spend in Iraq every day—and should become a model for future action.

In this provocative, ingenious book, Soderberg and Katulis make one of the most controversial arguments that foreign policy circles have seen in years: no more putting all our eggs in the basket of promoting democracy or market reforms, or even diplomacy, sanctions, or cash handouts to faltering governments. Instead, they argue, we should go right to the citizens of troubled nations and give them what they need most. People in the Congo, Iraq, Pakistan, and North Korea all have the same concerns, and the right to vote is far from the top of the list. They need freedom from war, good food and shelter, basic health care, and the reasonable hope that tomorrow will be better. It's not only the right thing to do; it's likely to do more for American interests than the policies we've been relying on for years.

Why have seven years of President Bush's "freedom agenda" failed to achieve freedom or democracy in Iraq, Afghanistan, or anywhere else? When democracy starts to sound like a code word for advancing U.S. interests, it backfires. Latin America provides an excellent example of why freedom's march has stalled, in large part due to quality-of-life issues. A 2004 survey showed that a majority of people in Latin America would rather have a government that provided economic gains than a democracy.

The Prosperity Agenda embraces a new and compelling strategy for overcoming that problem and dealing with the world. Giving money, weapons, and loans with lots of strings attached doesn't do it. But handing out vaccines, disaster relief, and $100 laptops does. Working to improve the basic lives of people will, in the end, help defeat terrorism, increase America's leverage against its enemies, weaken dictatorships, and, most importantly, save the lives of millions.