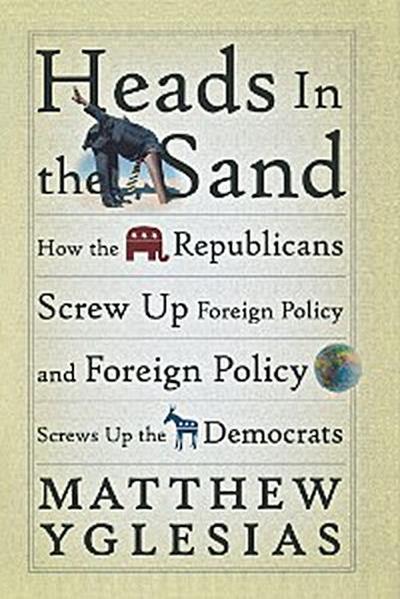 Heads in the Sand

"A very serious, thoughtful argument that has never been made in such detail or with such care."
—Ezra Klein, staff writer at The American Prospect

"Matt Yglesias is one of the smartest voices in the blogosphere. He knows a lot about politics, a lot about foreign policy, and, crucially, is unusually shrewd in understanding how they interact. Here's hoping that his new book will introduce him to an even wider audience. Once you discover him, you'll be hooked."
—E. J. Dionne, author of Souled Out: Reclaiming Faith and Politics After the Religious Right and Why Americans Hate Politics

"Matthew Yglesias is one of a handful of bloggers that I make a point of reading every day. Heads in the Sand is a smart, vital book that urges Democrats to stop evading the foreign-policy debate and to embrace the old principles of international liberalism--to be right and also to win."
—Fred Kaplan, author of Daydream Believers: How a Few Grand Ideas Wrecked American Power

Fast-rising political commentator Matthew Yglesias reveals the wrong-headed foreign policy stance of conservatives, neocons, and the Republican Party for what it is—aggressive nationalism. Writing with wit, passion, and keen insight, Yglesias reminds us of the rich tradition of liberal internationalism that, developed by Democrats, was used with great success by both Democratic and Republican administrations for more than fifty years. He provides a starting point for politicians, policymakers, pundits, and citizens alike to return America to its role as leader of a peace-loving and cooperative international community.