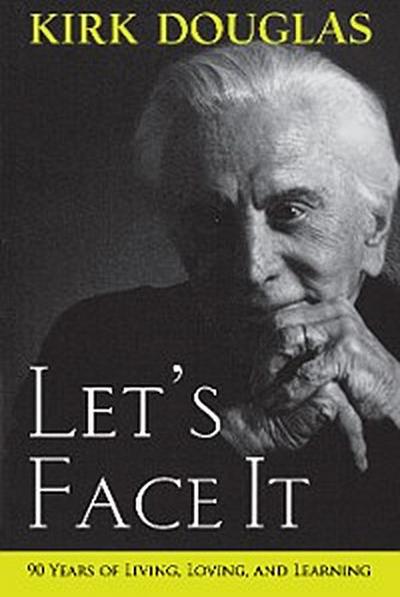 He was one of the brightest stars in Hollywood, a hard-charging actor whose intensity on the screen was mirrored in his personal life. As Kirk Douglas grew older, he became less impetuous and more reflective. In this poignant and inspiring new memoir, Douglas contemplates what life is all about, weighing current events from his frame of mind at ninety while summoning the passions of his younger days.


Kirk Douglas was a born storyteller, and throughout Let's Face It he tells wonderful tales and shares favorite jokes and hard-won insights. In the book, he explores the mixed blessings of growing older and looks back at his childhood, his young adulthood, and his storied, glamorous, and colorful life and career in Hollywood. He tells delightful stories of the making of such films as Spartacus, Lust for Life, Champion, The Bad and the Beautiful, and many others. He includes anecdotes about his friends Frank Sinatra, Burt Lancaster, Lauren Bacall, Ronald Reagan, Ava Gardner, Henry Kissinger, Fred Astaire, Yul Brynner, John Wayne, and Johnny Cash. He reveals the secrets that kept him and his wife, Anne, happily married for more than five decades, and talks fondly and movingly of times spent with his sons, Michael, Peter, Eric, and Joel, and his grandchildren.

Douglas's life was filled with pain as well as joy. In Let's Face It, he writes frankly for the first time about the tragic death of his son Eric from a drug overdose at age forty-five. Douglas tells what it was like to recover from several near-death episodes, including a helicopter crash, a stroke, and a cardiac event. He writes of his sadness that many of his closest friends are no longer with us; the book includes many moving stories such as one about a regular poker game at Frank Sinatra's house at which he and Anne were fixtures along with Gregory Peck, Jack Lemmon, and their wives. Though many of the players are gone, the game continues to this day.

In Let's Face It, Douglas reflects on how his Jewish faith became more and more important to him over the years. He offers strong opinions on everything from anti-Semitism to corporate greed, from racism to Hurricane Katrina, and from the war in Iraq to the situation in Israel. He writes about the importance in his life of the need to improve education for all children and about how we need to care more about the world and less about ourselves.

A must-read for every fan, this engrossing memoir provides an indelible self-portrait of a great star - while sharing the wit and wisdom Kirk Douglas accumulated over a lifetime.