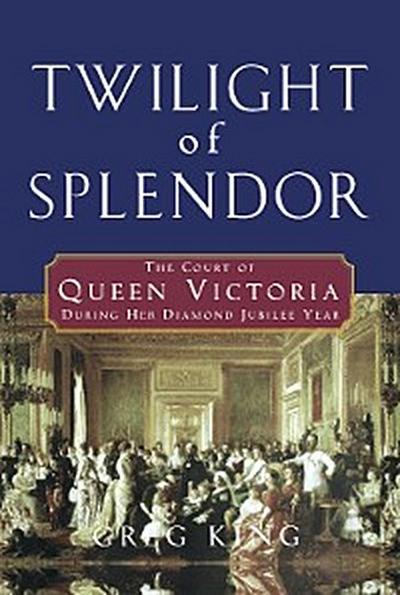 Queen Victoria ruled the most powerful empire the world has ever seen, covering one fourth of the earth's land surface, reigning over subjects on every continent, and exercising undisputed mastery of the oceans in between. She was the "Grandmother of Europe," with descendants occupying the thrones of half a dozen nations, and more to come. The very era in which she lived already bore her name. In June 1897, her proud and prosperous nation marked her sixtieth year on the throne of England with the most lavish display of pomp, circumstance, wealth, and affection in its history.

Twilight of Splendor presents a breathtaking portrait of a sovereign and her empire at the height of their global power. Focusing on the spectacle of Queen Victoria's Diamond Jubilee, it combines a thrilling account of that massive celebration with an intimate exploration of Victoria's world--her splendid palaces and possessions, the grand banquets and balls she hosted, her immense wealth, the politicians and courtiers who did her bidding, her confidence and assertiveness as a ruler, her surprising personal humility, and her perpetual state of mourning for her beloved husband, Prince Albert.

Based on hundreds of published and unpublished sources from the period, including Queen Victoria's private correspondence and personal journals, Twilight of Splendor is must reading for Anglophiles, Victorian-history buffs, and anyone interested in the golden age of monarchy.