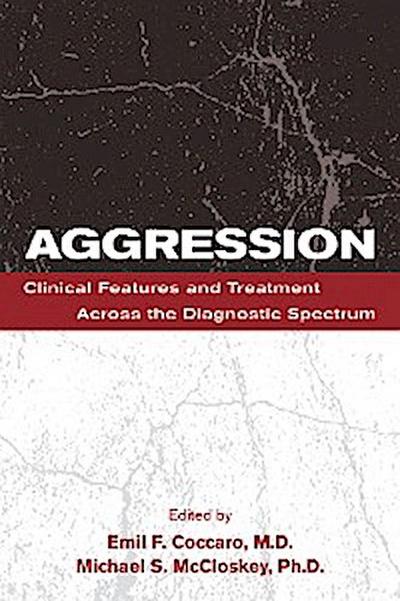 Based on the latest research, Aggression: Clinical Features and Treatment Across the Diagnostic Spectrum is designed to aid mental health practitioners in identifying and treating aggression in diverse patient presentations.

Aggression: Clinical Features and Treatment Across the Diagnostic Spectrum addresses the role aggression plays in intermittent explosive disorder (IED), referred to as "primary aggression," and in a host of other psychiatric disorders -- from autism to posttraumatic stress. Aggression is a well-studied, multidimensional phenomenon that may be parsed by cognition, affect, and behavior. Occurring as primary aggression and as a symptom of other psychiatric disorders, aggression is both common and destructive -- of property, relationships, and the social order. The editors were instrumental in the development of the DSM classification for IED, and the book discusses the evolution of the diagnostic criteria from the 1950s to the current DSM-5. This long-range perspective informs the volume and provides a firm foundation for the clinical content, which is case-based and accessible. Moreover, each chapter is consistent in structure, moving from phenomenology to psychobiology to clinical approach and treatment. The book emphasizes that although abnormal psychobiological systems, including neurochemistry and neural circuits, may increase the risk of behavioral aggression, influences associated with genetics, epigenetics, and environmental forces are also extremely important, and these are discussed in-depth in each chapter.

Chapter topics were selected for their clinical relevance:  Two chapters are devoted to primary aggression, first distinguishing form (verbal and physical) and type (direct or indirect); next, delineating the phenomenology, psychobiology, and comorbidities; and then exploring current treatment options, both psychopharmacological and psychotherapeutic. Because aggression represents the most common reason for referral to psychiatric care in youth, most frequently in the context of disruptive behavioral disorders, including attention-deficit/hyperactivity disorder, the book devotes a chapter to these disorders, emphasizing prevention, assessment, and treatment (e.g., self-regulation, skill-building, improved support systems, and medication). Aggression and anger may play a role in the onset and maintenance of eating disorders, complicating clinical presentation and influencing prognosis and treatment. The chapter on eating disorders addresses aggression, both self- and other-directed, and provides measures with sound psychometric properties for assessing eating disorder psychopathology and aggression. The chapter on anxiety disorders highlights the prevalence of aggression, hostility, irritability, and anger in patients with these disorders, noting that these individuals may be at increased risk due to genetic sensitivity to stress. The role of aggression in social anxiety disorder, panic disorder, and generalized anxiety disorder is explored in-depth, and current treatment recommendations are discussed. In addition to carefully chosen clinical vignettes, the book employs chapter-ending summaries and key clinical points and is replete with tables presenting information such as rating scales and summaries of pharmacological management.

Cogent, compelling, and clinically rich, Aggression: Clinical Features and Treatment Across the Diagnostic Spectrum examines aggression in its myriad forms and manifestations while offering cutting-edge guidance on assessment and treatment.