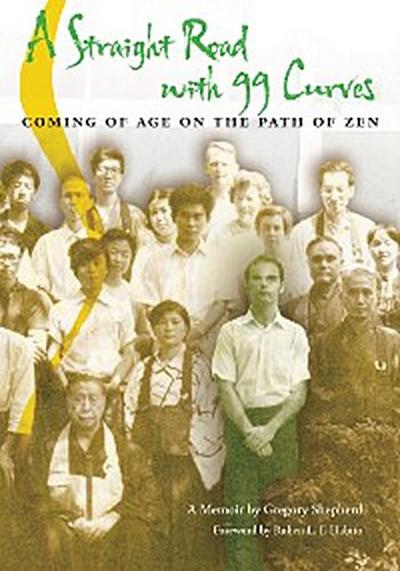 A Straight Road with 99 Curves

From fascination to disillusionment and back, a memoir of one man's quest for Zen and spirituality in America and Japan.

"Deeply involving, instructive, and capable of touching any reader who cares about the search for meaning."—Mitch Horowitz, author of Occult America

"In being so frank about his own struggles and fantasies, Greg's personal tale becomes something more universal."—David R. Loy, author of Money, Sex, War, Karma: Notes for a Buddhist Revolution

In 1971, when Greg Shepherd was in his early twenties, he left New Jersey and joined the Koko An Zendo community in Hawaii. What began as a quest for enlightenment became Greg's confrontation with his own inner demons: his need for approval, his distrust of authority, and his ego-driven fixation on achieving the profound spiritual breakthrough of kensho ("the Big K"). Later, in Japan, he struggled with prejudice and cultural rigidity and found his deeper meditations leading to actual panic attacks over fear of losing himself. Ultimately, he broke with Zen and his teachers to pursue a career in music.

This frank memoir traces Greg Shepherd's meandering path from seeker to disillusionment, and, over a decade later, his way back to Zen and inner peace. We experience Zen practice in Japan and Hawaii and meet Zen masters Yamada Koun Roshi and Robert Aitken, the "dean of American Buddhism" (who had once pegged Greg as his successor). And we understand why Zen was so appealing to the American counterculture and how its profound lessons of focus and detachment remain insightful and important.

Gregory Shepherd has studied Zen since the early 1970s in Hawaii and Japan. He is associate professor of music at Kauai Community College.

A Straight Road with Ninety Nine Curves: Coming of Age on the Path of Zen"

I return to Kamakura, Japan in 2002 for a short visit. I had left Yamada Koun Roshi’s San Un Zendo 18 years earlier after a falling out. Now, all these years later, I stand outside the temple gate, wondering what went wrong and why. I resolve to recall and write down the events of those days in order to try and make sense of them. I remember…

I remember my childhood in New Jersey where I was raised in a strict Catholic environment that I rebelled against. Rebellion becomes a salient part of my character both now and later in my Zen practice. The reader also meets my brother, Paul, a fellow traveler on the path of Zen. Together we begin to read all manner of esoteric literature and begin our fledgling practice.

Paul and I arrive in Hawaii where we promptly become residents of Koko An, the residential center for the Diamond Sangha which had been started by Robert Aitken in 1959. In addition to my zazen practice, I read everything about Zen that I can get my hands on. One of these books, “The Three Pillars of Zen”, has a section devoted to the personal enlightenment accounts of several people, including a man identified simply as “Mr. K.Y.” who has an experience of incredible magnitude.

While at Koko An, I have an experience which I am convinced is a true kensho, or Enlightenment. I will find out for sure soon enough: “Mr. K.Y.” or “The Three Pillars of Zen” is coming to Koko An to lead a weeklong sesshin, or retreat.

The sesshin begins. I go to dokusan, the one-on-one interviews between students and the teacher, and to discover to my great chagrin that Yamada Roshi does not think I’ve had kensho at all. I am crushed, but soon redouble my efforts at Enlightenment.

I spend a training period at Maui Zendo in preparation for another sesshin with Yamada Roshi who will return to Hawaii in several months. At the end of this sesshin, I ask Yamada if I might be able to come to Japan and study with him. He gives his permission.

I arrive in Japan and feel immediately disillusioned at the noise and pollution which stands in stark contrast to my idealized version of a land of refinement and sensitivity with shakuhachi flutes trilling over still waters. I go to a sesshin led by Yamada Roshi. He confirms my kensho experience…but I feel unchanged. Is there something wrong with me? Why haven't the heavens opened up in jubilation?

I begin my actual life in Japan, learning the language and customs, and teaching English to support myself. My disillusionment with the country increases, especially when I am continually gawked at in the streets and called names along the lines of "fucking foreigner".

I get to know Yamada Roshi better. One of most striking things I learn about him is that, despite his cataclysmic enlightenment experience, he has a volcanic temper on occasion. I find this both bewildering and liberating. I have a temper of my own and now don't feel so bad about it. On the other hand, I had thought that enlightenment as deep as his would have elevated him to a higher plane of existence where he remained eternally unperturbed by the trials of life. What's going on here?

I find deep in the mountains an old, abandoned hut near Engaku-ji, one of the most famous Buddhist temples in Japan. I immediately co-opt it on weekends for mountain zazen. It is peaceful and serene---until a group of schoolchildren stumble upon it and me inside sitting in the lotus position. They are dumbstruck until one of them shouts "Gaijin!" at the top of his voice and they all go running away as if they have had a face-to-face encounter with Godzilla. Later on, Yamada Roshi's wife broaches the topic of my future, implying that I will one day be a "wonderful roshi". This somehow does not jibe with my feelings about myself---especially since I have recently been experiencing bizarre panic attacks. How could I possibly lead others in their spiritual practice if I myself am so imperfect? I fly back to Hawaii, relieved to be out of Japan.

Bob Aitken is now Aitken Roshi, having been "ordained" by Yamada Roshi. He is now a teacher in his own right, and he makes it clear that he wants me to be his successor. I still feel wholly unsuited for any such role, particularly since I am only 23 years old and continuing to have the baffling panic attacks. The cognitive dissonance between being groomed to be a Zen master and having unpredictable panic attacks is too much for me. I resolve to leave Zen life and do what I really want to do: pursue music. Aitken Roshi is crushed. Neither of us is a good communicator, however, and we part ways without discussion. A long estrangement begins.

I major in music at the University of Hawaii and begin a Master's degree in ethnomusicology with a concentration on Japanese music. Despite my earlier disillusionment with the culture, I still feel a strong pull back to the country. I apply for and win a long-term Graduate Fellowship from the Japanese Ministry of Education. I will be studying at Tokyo University of Fine Arts and Music, and I will be living again in Kamakura. I begin attending San Un Zendo again, but my relationship with Yamada Roshi and the senior leaders at the temple deteriorate as I bridle against the authoritarianism implicit in Japanese Zen, something I feel is an unnecessary cultural accretion rather than anything intrinsically arising out of Buddhism. After my fellowship ends, I return to Hawaii without attempting a rapprochement with Yamada Roshi.

Back in Hawaii, I am unable to find employment in academia. I begin working as a lowly busboy at a TGI Friday's. I feel that I have wasted my life because of Zen. I had given up a full scholarship to an Ivy League university, traipsed to Hawaii and Japan to study Zen---and all I had to show for it was dead-end jobs. I sink to a very low point.

A year or so later I am offered a teaching position at Kauai Community College. My economic salvation has come. But I am still deeply unsettled by the essential dukkha (unsatisfactoriness) of life. A series of events leads me back to zazen.

Eventually, I return to the Diamond Sangha, but there is still a great deal of tension between me and Aitken Roshi over my leaving the sangha years earlier. However, he is now retired, and his successor, Michael Kieran, is someone I have known for years. We re-establish an easy rapport and I resume my koan study. In time, I have several Zen experiences that clarify my existential doubts. For the first time in my life, I feel whole.

I return to Kamakura to revisit San Un Zendo. Closure at last.