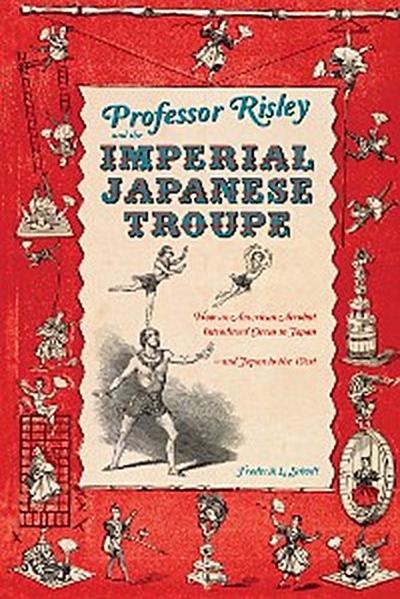 The unlikely history of early cross-cultural encounters between the West and Japan, featuring acrobats, jugglers, and a colorful American impresario.

"Frederik L. Schodt has at long last unveiled the fascinating story of 'Professor Risley.' Circus scholars, history buffs, and anyone with an ounce of curiosity should be grateful to him."—Dominique Jando, Circopedia.org


"Professor" Risley (Richard Risley Carlisle) introduced the Western circus to Japan in 1864. Three years later, this former acrobat gave many in the West their first glimpse of Japan when he took his "Imperial Japanese Troupe" of acrobats and jugglers on a triumphant tour of North America and Europe. Over the next few years, the Troupe performed before presidents, monarchs, and ordinary citizens. Frederik L. Schodt argues compellingly that such early popular entertainments helped stir a curiosity about all things Japanese that eventually led to japonisme, The Mikado, and, in our time, the boom in manga and anime.


Schodt's depiction of Risley and his troupe is enlivened by portraits of the circus demimonde and supported by nineteenth-century photographs, posters, and drawings, many in color. His accounts of these first meetings between Westerners and Japanese shed new light on how different cultures meet, mingle, and influence each other. Descriptions of crowds, dazzling routines, and superstar troupe performers like the famous Little All Right are a delightful revelation to anyone interested in Asia, the circus, and popular entertainment.


Frederik L. Schodt has authored numerous books about Japan, including Manga! Manga! and Native American in the Land of the Shogun. In 2009 for his work he was awarded the Order of the Rising Sun, Gold Rays with Rosette.

A brief reflection on the now-forgotten 19th century Western craze for Japanese acrobats, its relationship to the Japonisme movement, and its parallels to the 21st century J-pop invasion.

The Imperial Japanese Troupe, led by Professor Risley, arrives in San Francisco from Yokohama, and astounds the local citizens. But they have to compete with another Japanese acrobatic troupe, which had beaten them to the city by nearly a month.

Act 2. Who Was Professor Risley?

The early years of Risley, showing his remarkable trajectory in life, and how he became an acrobat and impresario in the United States and Europe, with an international name recognition and celebrity rivaling the most famous modern pop stars.

In the late 1850s, Risley heads west, to California, Oregon, Hawaii, New Zealand, and Australia, following the trail of gold-generated wealth. He makes a successful living as an entertainer on the American and Australian frontier, performing for audiences who crave amusement.

During the American Civil War, in the first half of the 1860s, Risley became an participant in the just-developing Asian entertainment circuit, taking his own full circus to Calcutta, Singapore, Manila, Bankok, Hong Kong, and Shanghai, to name a few cities.

In 1864, Risley arrives in Yokohama from Shanghai with his circus, thus becoming the first person to introduce Western-style circus into Japan. Because he is not allowed to tour outside of Yokohama, his performers desert him. He remains in Yokohama, and introduces ice cream into Japan. In 1866, he hits upon the idea of taking Japanese acrobats and jugglers to Paris Exposition Universelle. His troupe members receive the first official travel permits granted to ordinary citizens in Japan.

Act 7. At the Exposition

At the Paris Exposition, in the nearby Cirque Napoleon, the Imperial Japanese Troupe wins the hearts of the citizens of Paris, even though they are competing with another Japanese acrobatic group. In Paris they meet with Prince Akitake, the younger brother of the Tokugawa Shogun.

Act 8. The Long Way to London

When the theater they had reserved burns down in London, the Imperials tour the British provinces first, cross over to Holland and Belgium, and then open in London. Despite competition from numerous other Japanese acrobatic troupes, they win the hearts of Londoners, and perform before the Royal family.

Act 9. The Matter of the Contract

After conquering England, the Imperials tour Spain and Portugal, and then return to France. They face increasing difficulty, and are caught in a revolution in Spain. Their contract with Risley is nearly up, and because of their agreement with the Japanese government, it is time to go home.

At the end of 1869, half of the Imperial Troupe returns to Japan, and the rest stay with Risley another year. The Imperial Troupe continues to be successful, but never the way they were in the beginning. Meanwhile, in Japan a revolution has taken place, and their entire world has been overturned.

A summary of what it all means.