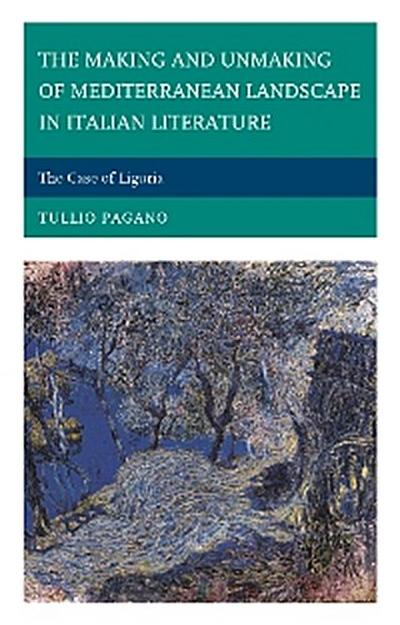 The Making and Unmaking of Mediterranean Landscape in Italian Literature

Situated between Po Valley and the Mediterranean Sea, Liguria appears as a rainbow-shaped and mountainous island, extending from the Tuscan sandy shores of Versilia to the French Alps. Through several modern and contemporary poets and novelists, Pagano illustrates fragile beauty of this quintessential Mediterranean landscape.

The book focuses on literary representations of the northern Italian region of Liguria, whose landscape has been portrayed by internationally-known Italian poets and novelists, from Eugenio Montale to Italo Calvino. The author argues that the most perceptive authors situate themselves on a metaphorical ridge dividing the “dark side” of Mediterranean landscape, with its harsh and mountainous territory, from the sun-drenched Riviera, celebrated by the tourist industry and for the most part destroyed during the so-called economic boom. The complex and often antithetical concepts of landscape examined in the introduction inform the author’s readings of those modern and contemporary writers who have tried to make sense of the ambivalences present in Ligurian landscape, from the period of Italian Risorgimento to the present.

Contents
PREFACE
Returning to Val Lentro
INTRODUCTION. Landscape between Place, Memory and Artistic Representation.
Why Landscape?
Contrasting Views of Landscape
The Ambivalent Nature of Landscape
Rosario Assunto’s Philosophy of Landscape
From the Opaque: Massimo Quaini and Italo Calvino’s Liguria
Between Local and Global
CHAPTER ONE. In the Beginning There Was the Road: Giuseppe Ruffini and the Discovery of the Italian Riviera.
The “Casual” Discovery of a Vernacular Landscape
CHAPTER TWO. Lost in the City; Camillo Sbarbaro’s Search for Landscape.
Camillo Sbarbaro between the Country and the City
A Glimpse of Paradise?
Pianissimo: Reification and the Need for Landscape
The Recurring Spell of the City
Back to Hell: The Landscape in Trucioli
The Great War and Sbarbaro’s return to Nature
Last “Shavings” of Ligurian Landscape
CHAPTER THREE. Landscape as Enigma: Eugenio Montale’s Liguria.
The Polyvalence of Montale’s Orto
Looking at the Sea: Montale’s Mediterranean
Suspended between Land and Sea
Dreams of an “Ancient Boy”
Looking at landscape (Through a Window)
The Impossible Return to the PastCHAPTER FOUR. Giorgio Caproni and the End of Landscape
Dawns, Sunsets and the World’s Scenario
Discovering the Dark Side of Ligurian Landscape
Away from Val Trebbia: Caproni’s Detour
The Reinterpretation of Aeneas’ Myth
The End of Landscape
CHAPTER FIVE. Italo Calvino between Two Continents
The Ligurian Diaspora and its Consequences
A Son’s Master Looks at Landscape
Growing up between Two Continents
Two Different Ways of Looking at Landscape
The Real Estate Plunge and the Destruction of Landscape
CHAPTER SIX. Francesco Biamonti and the Ruins of Landscape
Mediterranean Ruins
Walking through a Desolate Landscape
Writing between Two Worlds
Landscape with(out) Shepherds
Liguria as Mediterranean Crossroad
Between Remorse and Compensation
CHAPTER SEVEN. Annie Hawes and the Rediscovery of the Ligurian Landscape
EPILOGUE
BIBLIOGRAPHY
ABOUT THE AUTHOR