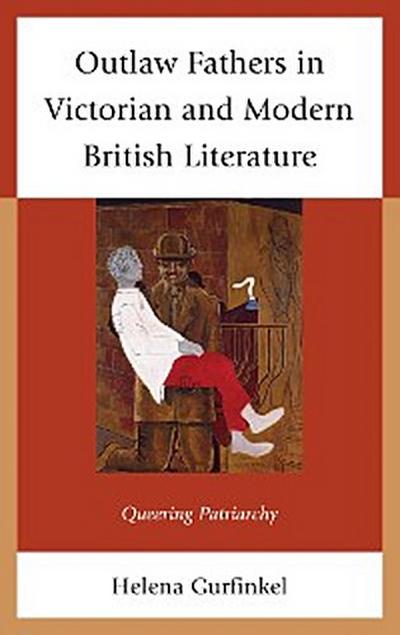 Outlaw Fathers provides an innovative reading of fatherhood and father-son relationships in a number of Victorian and modern literary texts. In addition to using a psychoanalytic paradigm for redefining the concept of patriarchy in literary studies and theory, it joins a larger contemporary conversation about changing masculinities and families.
Outlaw Fathers in Victorian and Modern British Literature: Queering Patriarchy traces the representations of outlaw fathers, or queer patriarchs, and their relationships with their queer sons, in a particular literary tradition: mid-to-late-Victorian and twentieth-century British fiction and memoir. Specifically, I look at such representations in Anthony Trollope’s Doctor Thorne (1858) and The Prime Minister (1875-76) (while also drawing on An Autobiography (1883) and The Duke’s Children (1880)); Samuel Butler’s The Way of All Flesh (published in 1901), Henry James’s “The Lesson of the Master” (1888), J. R. Ackerley’s My Father and Myself (written in the 1930s and published in 1968), E. M. Forster’s “Little Imber” (1961) (with an occasional detour into The Longest Journey (1907), Howards End (1909), and Maurice (published in 1971)), and Alan Hollinghurst’s The Spell (1998). In the coda, I consider the implications of including transgender, transnational female-to-male fathers of color in the ranks of queer patriarchy and discuss two contemporary novels, Jackie Kay’s Trumpet (1998, Scotland) and Patricia Powell’s The Pagoda (1998, Jamaica and the United States), as well as—briefly—an episode an episode of the television show The L-Word (2008) and the documentary U-People (2007).


The term “queer patriarchy” has two components. The first one is a non-traditional, primarily—but not exclusively—non-heterosexual, pervasively present, and culturally important, paternal subjectivity. The second one is the bond between such queer paternal figures and their sons, biological and non-biological. This study pays attention primarily to the relationship between psyche, language, and ideology, but it will join a larger conversation about the changing roles of men in general and fathers in particular, which is taking place outside of the field of literary studies.
Contents

Dedication
Acknowledgments
List of Illustrations
Introduction: From the Law of the Father to the Outlaw Father
Notes
Chapter I: Theoretical Genealogies
The “Negative” Oedipus: Origins and Interpretations
Theoretical Mothers
Psychoanalysis, History, Materiality
Fathers, Others, and Lacan
Queer family, Queer Negativity, Queer Sociality
Notes
Chapter II: “The Intercourse between the Squire and His Son”: The Father-Son Marriage Plot and the Creation of the English Gentleman in Anthony Trollope’s Novels
Gentlemanliness and Masculinity
An Autobiography of the Wolf Man: Trollope and Freud
Fathers and Sons: The Queer Marriage Plot of Doctor Thorne
“The Great Wharton Alliance”: The Redemption of Queer Patriarchy in The Prime Minister
“His Word…Had Never Lost Its Authority”: Upward Mobility and the Return of the Positive Oedipus
Notes
Chapter III: Sons as Lovers: Queer Kunstlerroman in Samuel Butler’s The Wayof All Flesh, Henry James’s “The Lesson of the Master,” and J.R. Ackerley’s My Father and Myself
“Freud Had Got Away with More than I Intended”: Queer Künstlerroman and Psychoanalysis
“The Dark Scowl, Which Would Come over His Father’s Face”: Samuel Butler’s Masochistic Künstlerroman
“…You Should Do Me”: Passing and Submission in Henry James’s “The Lesson of the Master”
“This So-Called Memoir, Which Remembers So Little”: J. R. Ackerley’s Marginal Modernist Portrait of an Artist
Notes
Chapter IV: “A Father’s Place Is in the Kitchen, Dear”: Male Domesticity and Motherhood in E.M. Forster’s “Little Imber” and Alan Hollinghurst’s
The Spell
“The Gay Daddy”: Psychoanalysis and Gay Male Parenthood
“Males Had Won”: Sexual Utopia in “Little Imber”
Building Theoretical Structures: Gender, Architecture, Psychoanalysis
From Cottaging to “Love in a Cottage:” Gay Male Domesticity in The Spell
Banished from the Father’s House: The Dark Side of Domesticity
Gay Male Motherhood and Contemporary Anti-Procreative Anti-Utopias
Notes
Coda: “The P-Word”: Queer Patriarchy beyond Maleness and Nation
The Phallus and the Ship: Diasporic Patriarchy and the Transgender Father of Color
Notes
Bibliography
Index