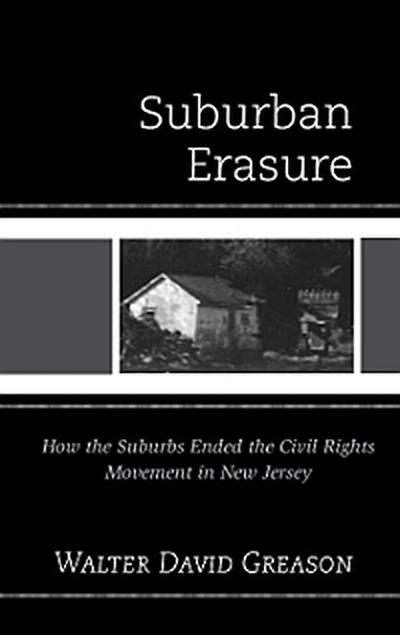 Suburban Erasure explains how racial inequality adapted in the twentieth century in order to shape American society today. It celebrates the voices of unheralded civil rights leaders, while clearly explaining how suburbs reflect earlier patterns of segregation.
For generations, historians believed that the study of the African-American experience centered on the questions about the processes and consequences of enslavement. Even after this phase passed, the modern Civil Rights Movement took center stage and filled hundreds of pages, creating a new framework for understanding both the history of the United States and of the world. Suburban Erasure by Walter David Greason contributes to the most recent developments in historical writing by recovering dozens of previously undiscovered works about the African-American experience in New Jersey. More importantly, his interpretation of these documents complicates the traditional understandings about the Great Migration, civil rights activism, and the transformation of the United States as a global, economic superpower. Greason details the voices of black men and women whose vision and sacrifices made the dream of Dr. Martin Luther King, Jr. possible. Then, in the second half of this study, the limitations of this dream of integration become clear as New Jersey—a state that took the lead in showing American how to overcome the racism of the past—fell victim to a recurring pattern of colorblindness that entrenched the legacy of racial inequality in the consumer economy of the late twentieth century. Suburbanization simultaneously erased the physical architecture of rural segregation in New Jersey and ideologically obscured the deepening, persistent injustices that became the War on Drugs and the prison-industrial complex. His solution for the twenty-first century involves the most fundamental effort to racially integrate state and local government conceived since the Reconstruction Era. Suburban Erasure is a must read for people concerned with democracy, human rights, and the future of civil society.